Thma Bay Kaek is a small set of insignificant ruins which overlook the moat at Angkor Thom. It was built when Phnom Bakheng was the capital of Angkor and there isn’t much left of it to see.

Most of the site is in ruins, but the door frame is still intact. It’s not easy to see what the temple would have looked like when it was first built.

However, only a few tourists visit this site, but it can be a great way to escape the crowds and look over the moat at Angkor Thom. 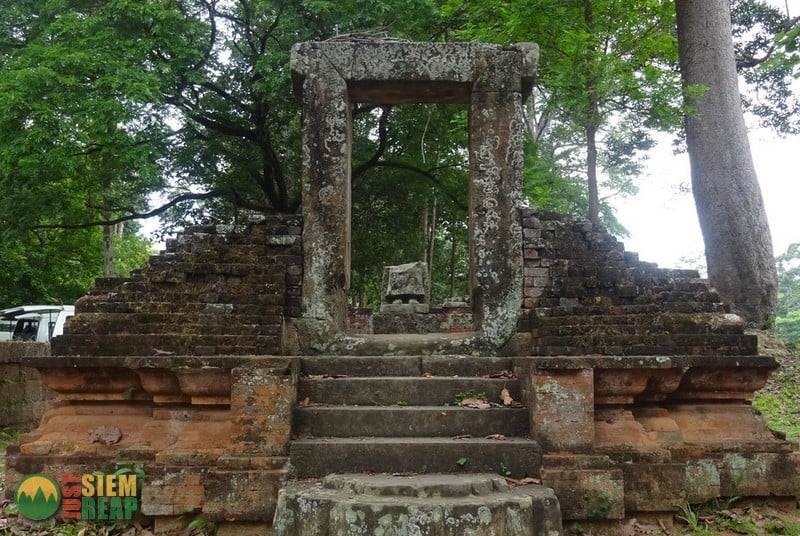 Thma Bay Kaek is located just a few metres away from the causeway which leads to the South Gate of Angkor Thom. It’s around 50m from the road and can be seen on the left side just before you reach the causeway. Nearby temples include Prasat Bei and Baksei Chamkrong.

To reach Thma Bay Kaek, keep heading north from Angkor Wat temple going towards Angkor Thom. You will see the temple on the left hand side in a small clearing just before you reach the South Gate of Angkor Thom.

Nearly every tour of the temples will take you past Thma Bay Kaek and most will continue without stopping. If you want to get a away from the crowds, then you should get out of your tuk tuk, taxi or tour bus and take a walk into the forest. You can stop at Thma Bay Kaek, Baksei Chamkrong, and Prasat Bei. The latter being the furthest away from the road.

There are no hotels allowed in the temple complex and it’s impossible to stay anywhere in the vicinity of Angkor Wat. However, most guests find accommodation in Siem Reap town as it is only a few kilometres down the road.

The town has hundreds of hotels to cater for the millions of tourists who visit Angkor Wat each year. Check out booking.com where you will find many hotels within your price range.

This small temple isn’t much to see, but you can stop by on your way to the other small temples nearby. At Prasat Bei, you can really escape the crowds of visitors and get some time to yourself. It’s perfect if you want to sit back and take a break or do a spot of meditation.

The temple was built as one of the many temples which surrounded Phnom Bakheng when it was the capital city of the Khmer empire. It was constructed by King Yasovarman I in the 10th century.

It was originally built as a Hindu temple and it’s not known what happened to it after it was built. It’s likely that it was still in use as a place of worship until the area was deserted in the 16th century.

The ruins were rediscovered by French explorers in the late 19th century and the area was cleared in the early 20th century. No restoration work has been done on the temple and there is very little to see today.

Thma Bay Kaek is the ruins of what was once a square brick tower. It would have faced to east on top of a laterite terrace. There would have been many similar temples around Phnom Bakheng at the time, but all have since disappeared.

An old sacred relic was found here. It was one of five gold leaves and it showed the image of Nandi (Shiva’s bull).