The three prasats at Kutisvara are in a complete state of ruin. For most visitors, there isn’t much to see. But for true Angkor aficionados, Kutisvara is a must-see temple.

Located just a kilometre or so from Ta Prohm and nearby Srah Srang, most people will completely overlook Kutisvara. Most drivers won’t know where it is, nor will they know the significance of this place.

The towers were built in the style of both Preah Ko and Pre Rup. 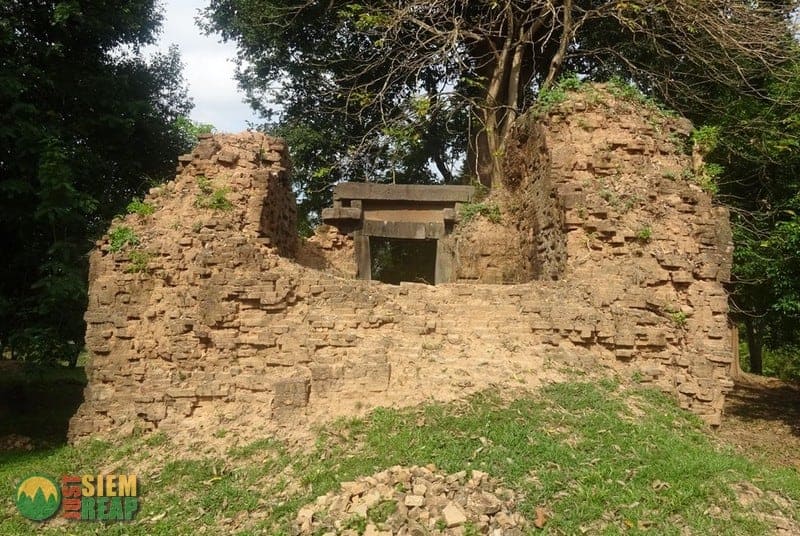 Kutisvara temple is located in the Angkor Archaeological Park just a short distance from Ta Prohm, Srah Srang, and Banteay Kdei. The temple is a little way from the road and not easily visible. Many drivers might not know exactly where it is, so you might need to explore a little.

To get to Kutisvara, you can head towards Banteay Kdei temple. From here, you’ll need to get out of the tuk tuk and start walking. Head along a small path next to some rice paddies, past a few local houses, and you’ll see Kutisvara in the clearing.

During the rainy season, the way is impassable for motos and bicycles, so you’ll have to get off and walk. You might want to bring some waterproof shoes for this time of year, because it’s likely that you’ll get wet!

Most tours won’t bring you to Kutisvara. In fact, many guides and drivers might not know exactly where it is. You might need to ask a some locals for directions, but it’s worth your time as very few tourist will visit this “secret temple”. If you’re following the Angkor Wat Small Circuit Tour, you can stop along the way when you’re finished at Ta Prohm.

Visit this temple when you’re visiting other temples in the area such as Ta Prohm, Banteay Kdei or Srah Srang.

Kutisvara is the “secret” temple in the Angkor Archaeological Park and one that 99% of visitors totally ignore. In fact, many locals won’t know this place or its significance. If you’re looking for a truly remote spot in the Angkor Park where you can relax and explore in total peace, then this is the place for you.

So what is it which makes Kutisvara so interesting? Well, it’s the site of Kuti which was mentioned in Sdok Kok Thom which describes a connection with Jayavarman II in the 9th century. Jayavarman II was the founder of the Khmer Empire. He reigned from 790 AD until 835 AD. The empire started in 802 AD at Mahendraparvata which is today called Phnom Kulen.

This means that Kutisvara was one of the first temples built during the Angkor period at some point in the early 9th century.

Inscriptions found at Banteay Kdei also talk about the temple being dedicated to Shiva and large statues of Vishnu and Brahma which were constructed in the 10th century.

Other than this, not much is known about this early temple.

There are three collapsed towers built on a north-south row. All the temple entrances are facing to the east. The middle tower was built from brick and the two outer towers were built from laterite.

All three towers are in very poor condition and are mostly buried.