East Mebon is a mountain temple which was built in the middle of the 10th century. It was built by King Rajendravarman II and dedicated to Shiva.

Mebon is a pyramid of terraces with stunning sculptures and statues, including the 2m high elephants which sit on each corner.

Although not as popular as the main temples (Angkor Wat, Bayon and Ta Prohm), it is a widely visited temple and one that you should definitely make time for during your visit to Siem Reap. 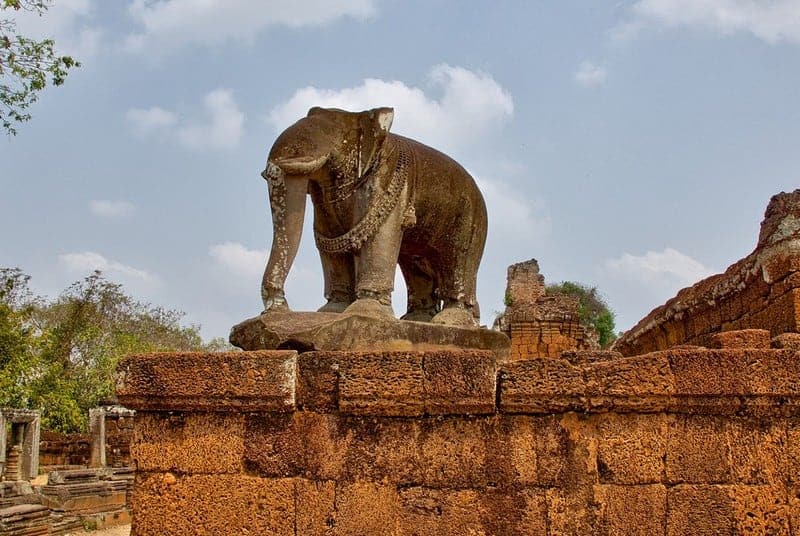 East Mebon was built on an artificial island in the middle as East Baray. The baray was a reservoir built to store water, but it is now dry. The temple is located around 1km north of Pre Rup temple and a few kilometres south of Ta Som and Neak Pean.

You can reach East Mebon from a few directions. Firstly, you can head east out of the Victory Gate at Angkor Thom towards Ta Prohm. Then keeping heading to Srah Srang and continue to Pre Rup. Follow the road round to the left and head north to East Mebon.

Alternatively, you can head east from Angkor Wat towards Srah Srang before following the to Pre Rup and then north.

If you’re coming from Banteay Samre, you can keep heading west for 2 or 3 kilometres where East Mebon will be to your right.

Most visitors will not just visit East Mebon alone. It will take less than an hour or two to explore the temple in its entirety. The temple usually forms part of the Angkor Wat Grand Circuit Tour.

It’s also possible to combine East Mebon with a visit to Banteay Samre as it’s not too far away.

If you want to see this temple, it’s recommended you combine it with other temples in the area such as Pre Rup, Banteay Kdei, Ta Som, or Neak Pean.

There are no hotels or any other type of accommodation near East Mebon. Most guests will stay in Siem Reap and visit the temple as part of a tour.

In Siem Reap town, there are hundreds of hotels to suit any budget.

East Mebon is a great place to visit and you can get some great photos. There are the two-metre tall elephants which sit on each corner, the five towers which look like Angkor Wat, and great views of the surrounding area.

The temple isn’t as widely visited as other temples, but as it is part of the grand circuit tour, so it does get quite a few visitors. However, it’s quiet enough to get some great photos without having lots of people in the background.

East Mebon was built in the middle of the now dry East Baray which was originally called Yasodharatataka. It was built by King Rajendravarman II in 952 AD and dedicated to the Hindu god Shiva.

The temple wasn’t used as the King’s state temple, instead Pre Rup was was the state temple which was built less than a decade later.

It’s thought that East Mebon was deserted some time in the 16th century like most of the temples at Angkor.

East Mebon was rediscovered by French explorers in the 19th century and it was restored in the 1930s.

There are five towers which sit on top of a three-tiered pyramid. There are three enclosures which surround the temple. The five towers represent the mythical home of the Hindu gods, Mount Meru.

In the middle of each of the four sides there is a landing platform for boats. On each corner, there is a two-metre tall elephant standing guard.

The inner enclosure contains the second platform. Again, there is an elephant standing on each corner. In the enclosure there are five libraries and eight sanctuaries. They each contain detailed sculptures which are still visible today.

The entrance gates to the inner enclosure have very intricate carvings of Indra, Vishnu as well as elephants and lions.

On the third level there is a large sanctuary (tower) surrounded by four smaller towers at each corner. Here you can see carvings and inscriptions showing Shiva, Indra, and other figures from Hindu mythology. All of the five towers have a door pointing to the east, with fake doors on the other three directions.