Preah Khan translates to the Royal Sword or the Holy Sword and is a 12th century Buddhist temple. The temple was built by King Jayavarman VII to honour his father and was built on site of the victory over the invading Cham armies in 1191 AD.

The temple is one of the largest created during the Khmer empire and measures an area of 56 hectares. Preah Khan is part of the Angkor Grand Circuit Tour and is a popular place to visit on the tourist trail.

The unrestored temple with trees and vegetation growing through the structure makes for great photography. 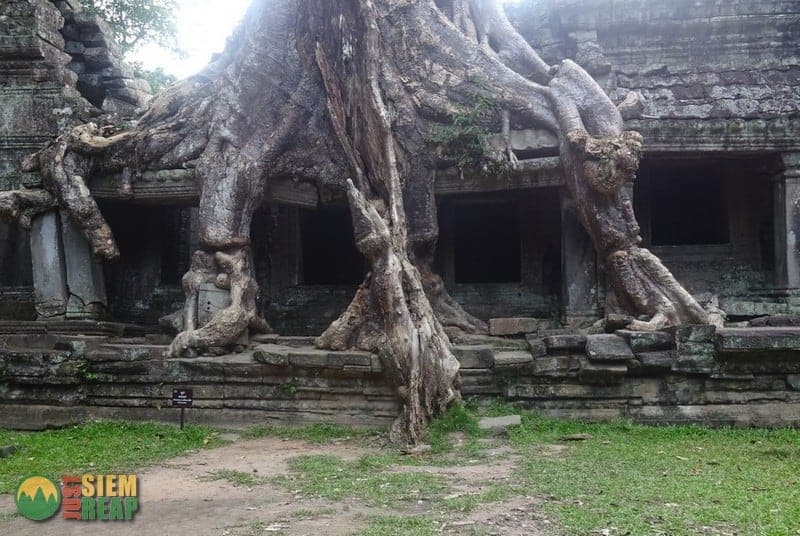 Preah Khan is located just north of the ancient city of Angkor Thom. Banteay Prei and Prasat Prei are located north of Preah Khan. To the east is Neak Pean and Krol Ko. At the opposite end of Jayatataka baray is Ta Som temple.

To get to Preah Khan, leave Angkor Thom by the north gate and follow the hard road round to the right. Keep following the road around a couple of bends and you’ll see the temple on the right hand side.

Alternatively, if you’re coming from Neak Pean, keep following the road. You can either turn left immediately at the end of the baray to take the back way into Preah Khan or keep going to enter via the main entrance.

Preah Khan is a popular temple on the tourist trails and is featured on the Angkor Grand Circuit Tour. If you’re not part of a tour and you’re making your own way around the park, then stop by Preah Khan after leaving Angkor Thom by the North Gate.

If you’re just on a one day tour of the temples, you will probably not have time to visit as most people prefer to see the “big three” – Angkor Wat, Bayon and Ta Prohm.

As Preah Khan is located in the Angkor Archaeological Park, you won’t find any hotels in the area. Instead, nearly all visitors to the Angkor Park will find suitable accommodation in Siem Reap town. There are hundreds of hotels to choose from from small family-run guest houses to large international-quality resorts.

Preah Khan is a stunning temple which has the jungle growing right through the middle of the structure. Visit Preah Khan early in the morning to get some great photo opportunities before the crowds start to arrive. The temple is also pretty quiet late in the afternoon just before the park closes.

Preah Khan was built in 1191 AD by King Jayavarman VII. It was originally built as a Buddhist temple and the name means Royal Sword or Holy Sword. The temple was built on the site of a victorious battle against the invading Chams.

The stele, a 2m x 0.6m carving features inscriptions which provide a lot of information about the history of the area. The main image in the carvings is of Jayavarman VII’s father. Moreover, there are also 430 shrines to other deities on the site. Each deity would have received a share of perfume, food and clothing.

Much like the other temples in the area, it’s believed that Preah Khan was deserted at some point in the 16th century.

The temple was rediscovered by French explorers in the late 19th century but it wasn’t until the late 1920s that the area was initially cleared. Some restoration work was carried out in 1939, but this was interrupted by the Japanese invasion during World War 2.

After this time, some of the statues have been removed and safely placed in museums.

When the temple was found, the jungle was literally growing right through the middle of it. Restoration workers including Maurice Glaze, had to decide how much to restore and how much to keep. He wrote that the vegetation and large trees gave the temple a pleasing look and didn’t want to destroy it. Therefore, the decision was made to make the site safe instead of restoring it.

Since 1991, the World Monuments Fund (WMF) has cared for Preah Khan. They have chosen to respect nature and and ruins of the temple. Work was limited to making parts of the temple safe for visitors.

Preah Khan is one of the largest temples built during the Khmer empire and although much of it has succumbed to nature, there is still a lot to see. The temple is in much better condition that one might expect.

Around the temple you will see many well-preserved carvings which depict Vishnu, Krishna, Shiva, and Brahma. There are also large guardians holding swords and battle scenes from Ramayana.

The entrance overlooking the Jayatataka baray has a small landing port for boats. The port is home to two lions which guard the temple’s entrance. From here, the King would take a boat to Neak Pean temple. From the port there is a 100m long causeway crossing over the moat. The bridge which goes over the moat is flanked by giants holding a snake-like naga, very similar to the ones at Angkor Thom.

The largest enclosure is contained by the moat and measures 900m long by 750m wide. This area would have been occupied by wooden houses for the servants working the temple.

The wall contains 5m high garudas which are fighting naga serpents. Many of these half bird and half man statues are placed at regular intervals along the wall.

The eastern gate (gopura) consists of three towers. The central tower is large enough for elephants to pass through.

The next enclosure is 165m wide by 220m long. The east entrance contains a well-preserved lion statue standing on guard. Here you can see carvings of Buddha and beautiful devatas. There is also a large two-storey structure and two libraries.

The main sanctuary is the most sacred part of Preah Khan. It is a perfect square which measures 55m on each of the four sides. There are many Buddha images which have survived to this day.

Here you will find a cruciform shaped gallery, small chapels and tombs. Many of the Buddha carvings here were destroyed during the Hindu uprising in the 13th century. There are lintels and carvings which contain many carvings of Vishnu, Krishna, and Buddha.

You will also find a pedestal which features a linga that represents the Hindu God Shiva. There is also a circular stupa which was added a few centuries after Preah Khan was initially completed. On the east side, there is a large statue of Lokeshvara with eight arms.