Ta Som is a captivating and charming temple. It was built in the Bayon style and has been well restored. Like Ta Prohm, there is a tree growing through part of the structure which provides excellent photo opportunities.

Built as part of the vast construction program led by King Jayavarman VII, this Buddhist temple looks similar to many temples built at that time.

The World Monuments Fund (WMF) started a 10-year long restoration program in 1998 to make the structure safe for visitors. Since then, Ta Som has become a favourite for many visitors on the Angkor Wat Grand Circuit. 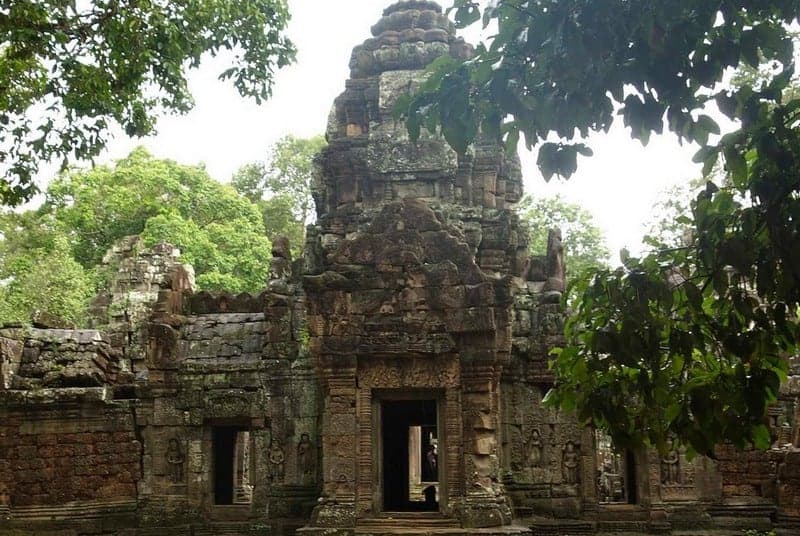 Ta Som is located about 100m to the east of the Jayatataka Baray. It’s the furthest temple on the grand circuit before you start to head back to town. Nearby temples include Neak Pean and Krol Ko. At the opposite end of the baray is Preah Khan temple.

Most visitors will follow the grand tour heading north out of Angkor Thom. Continue following the road around Preah Khan temple. After the Preah Khan temple complex, continue heading east along the road adjacent to the baray. Continue past Neak Pean to the other end of the baray and follow the road round to the right. You’ll see Ta Som on the left hand side about 100m from the road.

If you are coming from the east side of Angkor Wat or directly from Siem Reap town, you should take the road to Srah Srang. Once you get to Srah Srang, turn right and follow the road to Pre Rup and turn left. Continue heading north to the Easterm Mebon and keep going north for another couple of kilometres. You’ll see the Jayatataka baray on the left side and after around 200m, you’ll see Ta Som on the right side.

Ta Som is featured on the Grand Circuit Tour and is usually visited after Neak Pean and before Pre Rup temple. It’s one of the more popular temples on the tourist trail and does attract quite a few visitors. However, it doesn’t get anywhere near as many visitors as the other popular temples such as Angkor Wat, Bayon and Ta Prohm.

You will find a few hotels sharing the same name as Ta Som, but none are nearby the temple! There are no hotels allowed in the Angkor Park, but as Ta Som is on the edge of the park, you may find some small homestays in the villages around Banteay Srei.

Most visitors will find a hotel in Siem Reap town where there are 100s to choose from. As Ta Som is on the main road, it’s easy to reach from the town.

You should try to visit Ta Som because it has been wonderfully restored and nearly every part of the temple is open to visitors. You can see some great examples of ancient Khmer art from the Buddhist period of King Jayavarman VII. There is also a tree growing through the east entrance building which makes for some great photos.

Ta Som was built towards the end of the 12th century as part of the great building program by King Jayavarman VII. It is a Buddhist temple built in the Bayon style and dedicated to Jayavarman’s father, Dharanindravarman II.

Like most of the temples, it’s likely that Ta Som was deserted at some point in the 16th century.

Little had been done to restore Ta Som until the latter part of the 20th century. The World Monument Fund (WMF) started work on conserving the temple in 1998. During this time, they worked on making the four entrances accessible to the public. These outer entrance buildings are considered to be some of the best examples of towers showing Avalokiteshvara.

In 2007, the WMF repaired many sandstone blocks and completed their restoration work.

Ta Som features a single tower in the middle of the complex surrounded by three enclosing walls. The entry points on the east and west have four carved faces. One looking into each cardinal direction.

As you reach the central sanctuary, you can either walk around the courtyard or directly through the middle to reach the other side. You can walk right through to the east side where you will see a large tree with roots growing through the east entrance building.