Angkor Thom translates into English as the “Great City” and was the longest-lasting capital of the ancient Khmer Empire. The walled city was the centre of a huge building program by King Jayavarman VII.

Angkor Thom covers an area of 9 square kilometres and was constructed in the late 12th century. The city was eventually abandoned in the 16th century.

Notable temples which are popular with visitors include Bayon, Phimeanakas, and Baphuon. 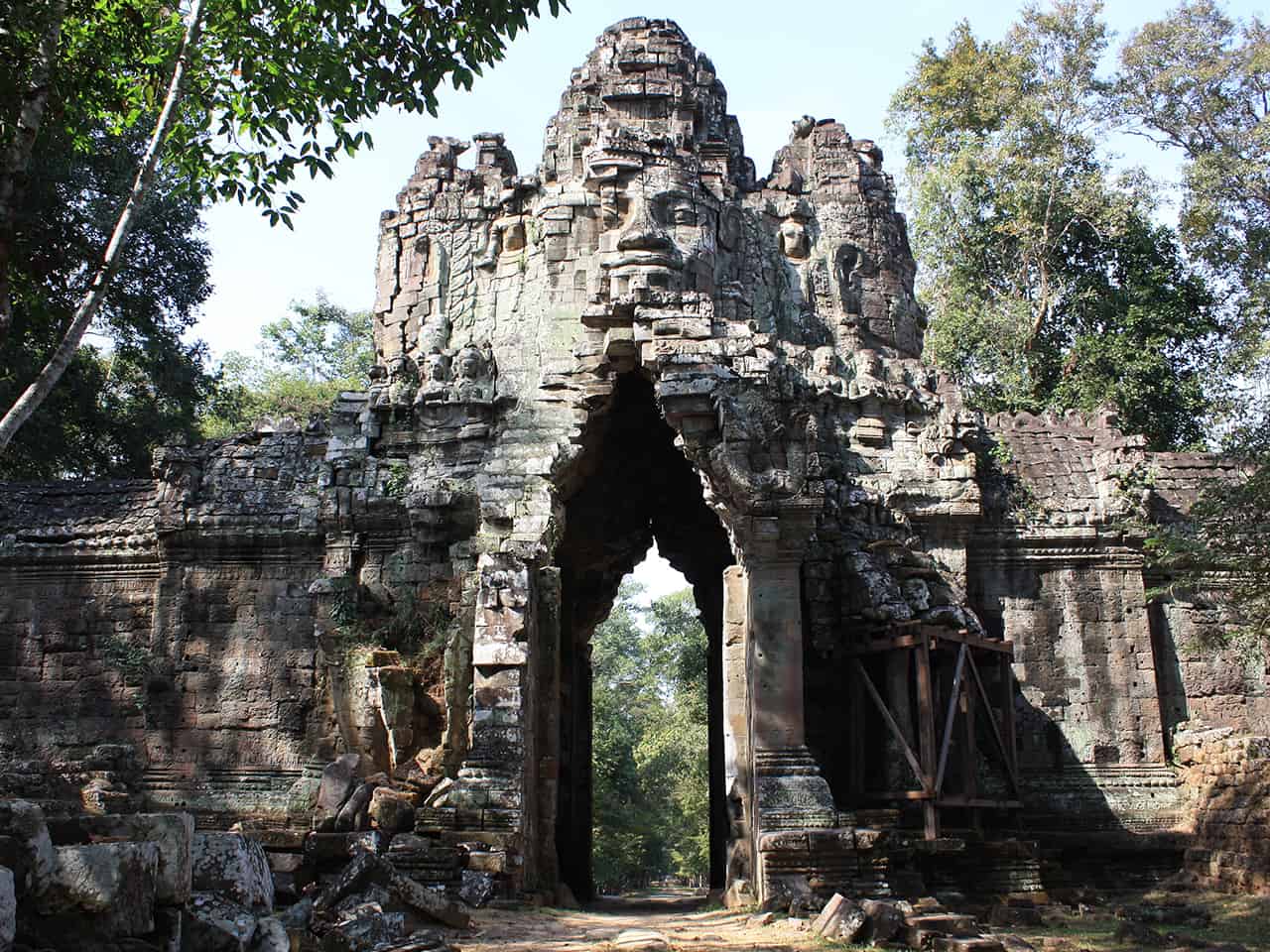 Angkor Thom is just a short tuk tuk ride away from Angkor Wat. Most people enter the ancient city via the East Gate or the South Gate.

If you’re heading from town you should head north out on Charles de Gaulle. Continue heading north until you reach the moat of Angkor Wat. Follow the road around Angkor Wat and keep heading straight and you’ll reach the South Gate of Angkor Thom.

Turn right out of Ta Prohm and follow the road straight. There will be a few turns before you reach the Victory Gate.

Angkor Thom is home to some of the most popular temples and nearly all tours will incorporate parts of the great city. The Angkor Wat Small Circuit Tour will take you to Bayon, the Terrace of the Elephants, the Leper King Terrace, and many others.

There are no hotels allowed in the Angkor Archaeological Park. As the park is only a few kilometres away from the town, it’s best advised to find somewhere in Siem Reap town.

If you’re looking to get away from the town, you may find some small homestays and other resorts located outside of Siem Reap.

Siem Reap has a range of accommodation options available including guest houses, hostels, homestays, resorts, and big hotels. You’ll definitely find something within your taste and budget.

If you’re coming to see the temples in Siem Reap, then it’s highly likely that you’ll find yourself in Angkor Thom at one point or another. Most of the popular and well-restored temples are located in the ancient city. The second most popular temple after Angkor Wat is Bayon temple and it’s located right in the centre of Angkor Thom.

Angkor Thom overlaps part of the previous capital city of the Khmer Empire was called Yasodharapura. King Jayavarman VII extended some of the previous structures and built some new temples.

The last known structure to have been build inside Angkor Thom was Mangalartha which is located about 300m away from the Victory Gate. Although built during the reign of King Jayavarman VII, it’s unknown exactly when it was completed. The small temple was dedicated to Vishnu, the Hindu God, in the year 1295.

Angkor Thom was sacked by the invading Ayutthaya Kingdom from Siam (nowadays Thailand) in the late 14th century and the city was abandoned sometime after this date.

It’s not known exactly when it was abandoned, but it was before 1609 when a western visitor documented and wrote about a great uninhabited city.

The name Angkor Thom was first used in the 16th century. Before this time, the Khmer people would simply use the name Yashodharapura as they didn’t have any clear distinction between the old and new capital cities.

The city covers an area of 9 square kilometres with 4 walls 3km in length. Each wall faces a cardinal point and there is a moat surrounding the entire city. The Bayon temple sits directly in the centre of Angkor Thom.

Each wall has an entrance gate with the east wall having an extra entrance called the Victory Gate.

To gain access to Angkor Thom, a causeway over the moat leads to the gates. Each causeway is flanked by 54 statues on each side with gods on the left and demons on the right. Each causeway has 108 statues, with a total of 5 causeways.

The gods on the left-side have peaceful and happy expressions whereas the demons on the right look like they are grimacing. Many of these statues are original, but some have been removed and stored for safe-keeping by the Angkor National Museum. Therefore, some of the statues you will see are replicas.

At the beginning of the causeway, there is a nine-headed serpent on each side whose body runs the length of the causeway. Each statue is holding the serpents body to form a barrier over the edge of the bridge.

As you reach the gates, large faces look out to the four cardinal points. The entrances are some of the most photographed places in the Angkor Park.