The Chapel of the Hospital or the Angkor Hospital Chapel is a small temple located near Ta Keo and Spean Thma close to the Siem Reap River.

It’s a small chapel and the only structure which is still visible from what would have been a hospital.

The chapel is rarely visited, but it can be a great place to visit if you want to get some photos without large crowds of tourists getting in the way. 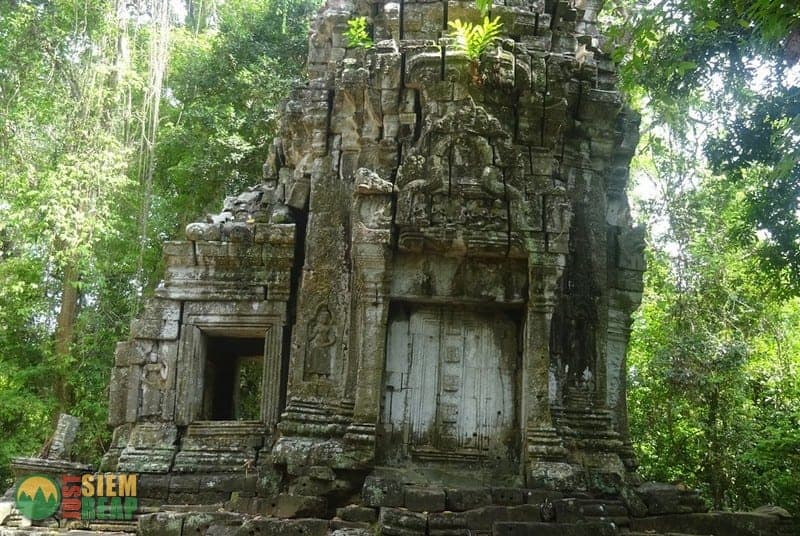 The Chapel of the Hospital is located between Angkor Thom and Ta Prohm. If you leave Angkor Thom via the East Gate and continue past Chau Say Tevoda, Thommanon, and the Siem Reap River, you will see it on the right side.

This small chapel is along the small circuit and easily reachable using any form of transport including tuk tuks, taxis, and bicycles.

Most visitors will drive past this temple as stop to see some of the more interesting temples in the region.

Most tours which include Angkor Thom and Ta Prohm will drive straight past it, so you can ask your driver to stop along the way. The Angkor Wat Small Circuit Tour will pass directly past this chapel.

If you’re part of a shared tour or a tour group, it’s unlikely that you will stop to see this temple.

As the hospital chapel is located in the Angkor Archaeological Park, then you will more than likely be staying in Siem Reap town. There are no hotels or accommodation inside the park. Siem Reap is home to hundreds of hotels to suit all tastes and budgets.

Why Visit Chapel of the Hospital?

Very few people visit this spot, so if you’re looking for a quiet place to get some photos, do some meditation, or stop for a picnic, then this might just be the place for you.

This chapel was part of one of the hospitals built by King Jayavarman VII. The king built 102 hospitals in the late 12th and early 13th centuries. Inscriptions in the area confirm this.

The hospital itself has long since disappeared as it would have been constructed by materials such as bamboo and wood.

Like most of the temples, it would have been abandoned at some point in the 16th century.

The chapel hasn’t been restored and is in poor condition.

There is a sanctuary located in the middle of an area with what would have been a wall surrounding it. The sanctuary door opens up to the east, as was normal with most temples. There are three false doors on the other sides.

There are carvings of female divinities around the chapel and there are also images of Buddha. Most of these carvings are in very poor condition, but some can still be seen.