Lolei temple is one of the temples which make up the Roluos group. It was built in the 9th century and was a Hindu temple dedicated to Shiva. It was once an island temple, but the reservoir where it was built has long since been dry.

Located around 20km from Siem Reap, Lolei isn’t visited as much as the other temples near Angkor Wat. However, it still gets a large number of visitors each day. If you have the time to visit, it’s definitely one you should go to.

Lolei was the last major temple to be built in what was once the capital city of the Khmer empire before King Yasovarman I moved the capital to what is now Angkor Thom. 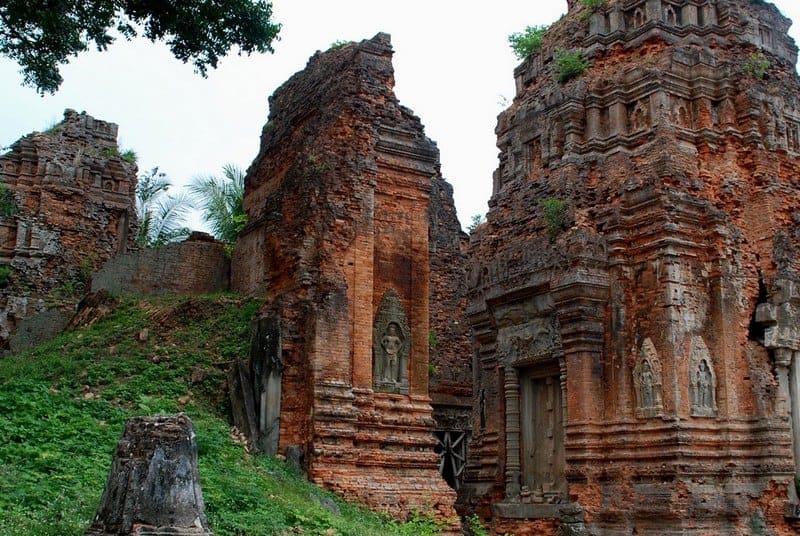 Lolei temple is located about 30 minutes from Siem Reap town in Bakong commune. Lolei village is home to the temple, a few small shops, a school and some local homes. It’s not too far away from the main road and the roads are good.

To get to Lolei, head out of Siem Reap along National Road 6 towards Phnom Penh. After you pass the turning to Bakong temple and Bakong Commune Hall, there is a turning on the left. Keep heading for about 600 or 700 metres and you will see the temple on the left side.

As the temple is only around 15km or so from town, you have a choice of transport options. Tuk tuks can easily reach the site in around half an hour from the town. Many visitors also decide to cycle to see the three main temples at Roluos.

However, if you’re going to cycle, it’s better to stay away from the main road and take the country route. If you want to avoid road 6, you can head out along Road 60 (the same road as the Angkor Ticket Office) and keep going all the way until you reach Booyoung Country Club. Turn right and then take a left after the country club to reach Lolei temple.

Most visitors will visit Lolei in conjunction with the other temples in Roluos – Preah Ko, Bakong, and Prasat Prei Monti. If you stop for something to eat in the area, this small tour might take 3 or 4 hours. Many guests decide to make this a cycling tour as you can explore the Siem Reap countryside along the way.

The Roluos Group is also often combined with a visit to Beng Mealea or a floating village tour of Kampong Phluk or Kampong Khleang.

In Bakong commune, you will find some small local guest houses and homestays. There is also a Buddhist retreat in the area. However, due to the close proximity of Lolei to Siem Reap town, it’s most likely that you’ll stay in a hotel in Siem Reap.

The town has grown into a large tourist hub over the years with hundreds of hotels. There are hotels to suit all tastes and budgets.

Although it’s only around 15km or so from Siem Reap, it’s enough for most visitors to give it a miss. You can explore Lolei without the crowds at Angkor Wat and it can be a much more peaceful experience. Without thousands of people in the way, you can take the time to get some great photos, and explore at your own pace.

Lolei temple was built in 893 AD by Yasovarman I. It was built as a Hindu temple and dedicated to Shiva. It was the last of the temples to be built in what as called Hariharalaya. This city was once the capital city of the Angkor empire. In fact, the name Lolei is likely to come from the name Hariharalaya.

It once sat in the middle of an artificial island just north to the centre of Indratataka baray which was a huge reservoir. The reservoir has long since been dry. Historians think that the temple would have been a symbol of the mythical home of the Hindu gods, Mount Meru. Indratataka baray measured 4km by 750m and was dug as a source of drinking water for the capital.

The temple would have continued to be used after the capital city was moved to Yasodharapura, which is today known as Angkor Thom.

It’s thought that it was abandoned some time in the 16th century.

Nowadays, Lolei is quite a popular temple to visit, but nowhere near as popular as the temples in close vicinity to Angkor Wat.

The site would have had a wall surrounding the towers with an entrance building (gopura), but they no longer exist today.

Each tower is very decorative and includes carved devatas, lintels, and false doors. There are motifs and carvings of Indra of top his elephant – Airavata. There are also some 7-headed nagas and serpent monsters carved into the lintels too.