Baphuon temple is located inside Angkor Thom, but it is one of the more quieter temples. You can easily explore the temple without the crowds which flock to temples such as Angkor Wat, Bayon, and Ta Prohm.

The temple is one of the larger temples built during the Khmer empire, but it is in poor condition. This is, perhaps, the reason why many visitors tend to overlook this temple. Moreover, it is at the end of a 200m long causeway with no protection from the sun.

The temple was built in the 11th century as a three-tiered temple mountain. Baphuon was dedicated to Shiva and was used as the state temple for King Udayadityavarman II.

Anytime, but early morning is coolest. 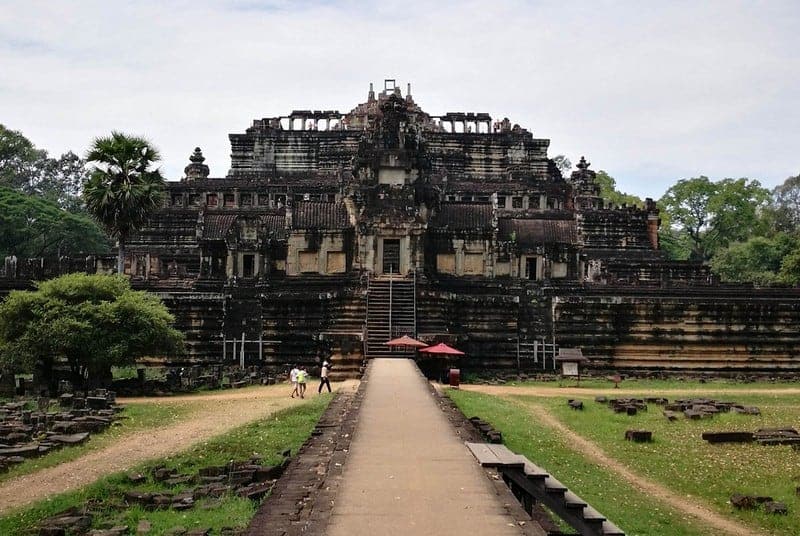 Baphuon is located inside Angkor Thom at the end of a 225m causeway which starts at the end of the Terrace of the Elephants. It’s situated just to the north of Bayon temple and south of Phimeanakas.

Baphuon is not far from the town and is easily accessible. Visitors use a variety of transport options with tuk tuks, taxis, and bicycle being the most popular.

Many tour groups also include Baphuon on the their itineraries, so you’ll often find many minivans and minibuses nearby.

To reach the temple, you can head north from Bayon temple for about 100m and then walk along the 225m causeway to the entrance of Baphuon.

Terrace of the Elephants: 500m

Baphuon is often included on the Small Angkor Wat Circuit Tour. Most commonly, it’s visited when you’ve just finished at Bayon. You’ll start with the Terrace of the Elephants before walking along the 225m causeway.

On the way back, you’ll probably stop at the Terrace of the Leper King and explore other nearby temples including Phimeanakas.

Baphuon is located inside Angkor Thom and as such, you won’t find any accommodation nearby. Many guests will find a hotel in Siem Reap and then make the short journey to Angkor Thom to visit the temples here.

Actually, many guests tend to overlook Baphuon. This makes it a perfect place to explore because you can escape the large crowds which visit the other temples such as Bayon and Angkor Wat.

Most overlook this temple because they want to spend more time on their tour exploring the big three temples (Angkor Wat, Bayon, and Ta Prohm). There is also a long 225m walk which doesn’t offer any protection from the sun.

However, the view from the top of the temple and the relative peace and quiet make this an excellent choice for visitors.

Baphuon temple was built in the mid-11th century and was used as the state temple for King Udayadityavarman II. Originally, Baphuon was a Hindu temple dedicated to Shiva.

In the 13th century, the temple was visited by the Mongolian Chou Ta-Kuan who described it as a “Tower of Bronze”.

Baphuon was converted to a Buddhist temple in the 15th century and a 70m long reclining Buddha was added.

Like most of the temples, it was abandoned sometime in the 16th century.

The temple was rediscovered in the late 19th century by French explorers. A large restoration project was started in the 20th century where the whole temple was dismantled. The blocks were carefully labelled and the foundations were re-enforced before being reconstructed.

When war broke out in the 1970s, the blocks were left laying around over 10 hectares of land around the temple and the plans were lost.

In 1996, a 16-year project by the École française d’Extrême-Orient started to put everything back together again. Work without the plans was painstakingly slow, but the temple reopened again in 2011. It was described as putting together a huge jigsaw puzzle.

The main entrance of Baphuon faces east and is connected by galleries. It looks very similar to the entrance of Angkor Wat. There are many devata statues, a walkway, and a pavilion. Here, you’ll see carvings of animals, warriors and hunters. There is a large pool at the end of the walkway.

There are three enclosures which were surrounded by galleries and library buildings, although most of these no longer exist and lay in ruins. One of the collapsed galleries was recycled and used to form a large reclining Buddha.

In the second enclosure, you’ll see scenes from Hindu epics as well as warriors fighting battles.