Prasat Beng Mealea is a temple which few people visit. It’s located around 66km from Siem Reap town and it’s this distance which puts most people off. It’s exactly this reason why you do want to visit Beng Mealea temple!

The “Jungle Temple” was built on an ancient highway and was an important temple in the history of the Khmer empire. Nowadays, it mostly lays in ruins and the jungle has literally taken over. This is where the nickname “Jungle Temple” comes from.

This fascinating temple is well worth the journey out and you’ll appreciate being able to explore without thousands of tourists around. The temple is surrounded by dense jungle which makes it nice and cool, even in the hot months.

As you can see, there are more reasons to visit Beng Mealea than not! 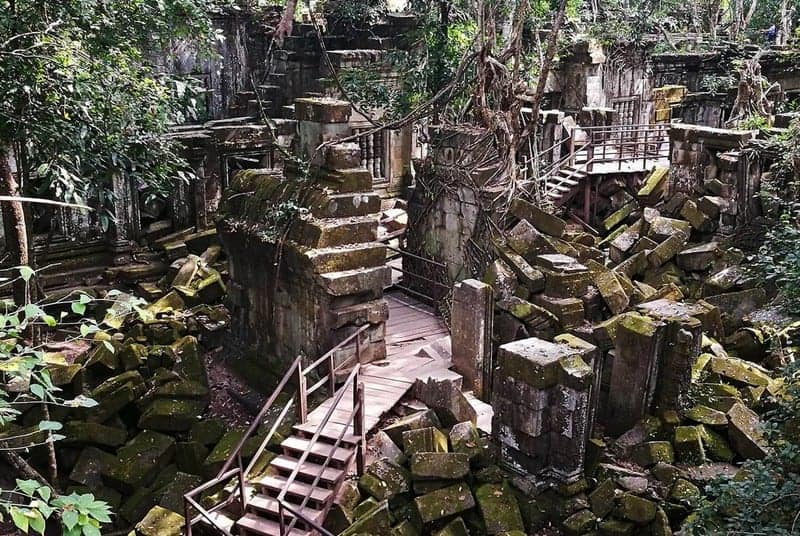 Beng Mealea is located around 66km from Siem Reap town. The temple is approximately 10km away from Svay Leu village. Situated on the edge of Phnom Kulen National Park on Road 64, it’s along the way to the neighbouring province of Preah Vihear.

If you’re coming from Siem Reap town, there are two routes which you may take.

First, you can head out through the Angkor Archaeological Park. However, you’ll need a temple pass to go this way. Head out to Angkor Wat and then east to Srah Srang and Banteay Samre. Continue along Road 66 before joining Road 64 and heading north. This route is only 58km, but the roads are much smaller so the journey will be slower if you’re taking a taxi or bus. Most cyclists will prefer this route.

Secondly, you can head out on National Road 6 towards Phnom Penh. After around 35km you’ll reach Damdek village. Turn left onto Road 64 and continue north for another 30km or so. Most taxis will take this route as the road is much bigger and the journey is quicker.

Beng Mealea is perfect for a day trip. If you’re into cycling and fit enough to make the 130km journey to the temple and back, this can be a popular tour option.

Most visitors will take a taxi to Beng Mealea and combine this with a trip to Koh Ker temple or Preah Vihear temple.

If you don’t want to take the extra journey to these “remote” temples, then you might want to combine it with a trip to the floating villages.

Finally, if you have an Angkor Temple Pass, you might want to see Banteay Samre or stop for the sunset at Srah Srang on the way back to town.

Our popular Beng Mealea tours include:

You won’t find many places to stay around Beng Mealea, but at the nearest town in Svay Leu, you will find some local guest houses. You may also find some home stays in the area.

Most guests will make a day trip to Beng Mealea and find accommodation in Siem Reap.

Some visitors may combine this with a trip to Koh Ker or Preah Vihear temple in the next province. In the provincial town of Preah Vihear, you’ll find many places to stay.

Beng Mealea temple, also known as the “lotus pond” is a great temple to visit. It’s far enough away from town to deter most visitors, but close enough that it can be easily reached.

The lack of visitors makes for a great morning of exploring the temple in relative peace and quiet. This also means that you can get some great photos if you’re into photography.

The thick jungle helps to keep the temple nice and cool, even in the hot season.

The wide open spaces around the temple are also great to sit back and relax. This is especially great if you’re with young kids as they can run around and you can easily keep an eye on them from a distance.

This history of Beng Mealea temple is largely unknown. It’s assumed that it was originally built as a Hindu temple by King Suryavarman who also built Angkor Wat.

However, there are also some Buddhist carvings here, but it’s not known if these were added by King Suryavarman II or at a later date.

The temple was built on an ancient highway which leads to Preah Khan Kompong Svay.

It’s assumed that Beng Mealea was abandoned like the other temples near Angkor Wat in the 16th century.

Beng Mealea was rediscovered in the late 19th century by French explorers.

During the Khmer Rouge era and the civil war which followed, Beng Mealea would have been a dangerous place to visit. It was part of the Khmer Rouge stronghold for many years.

Nowadays, the road is safe and the area in and around the temple has been fully demined. Although little work has been done on restoring the temple, it has been made safe for visitors.

The site was added to UNESCO’s tentative world heritage list in 1992.

Beng Mealea was built in the style of Angkor Wat. For this reason, historians assume that it was built at the same time.

The temple is smaller than Angkor Wat, but follows nearly exactly the same style. However, Beng Mealea was still one of the larger temples built during the Angkor period. The outer enclosure measures 152 by 181 metres and the moat is 875m by 1025m.

The temple is oriented to the east, but there are entrances on all four sides.

There are three enclosing galleries which surround a sanctuary in the middle. This has long since collapsed, but it’s the ruins which add to the charm of this once-great temple.

There are also libraries which contain extensive carvings which show Hindu myths such as the Churning of the Sea of Milk and other stories.

Leading to the temple, there are long causeways which have the seven-headed Naga along each side.