Prasat Bei is another Hindu temple built by King Yasovarman I. It was built in the early part of the 10th century and dedicated to Shiva. The name translates as the “three towers”.

The small temple is located very near to Phnom Bakheng, Angkor Thom and Angkor Wat. However, it’s rarely visited by tourists as most visitors prefer to see the more popular temples in the area.

If you’re looking for a quiet spot to escape the crowds. This might just be the place for you. 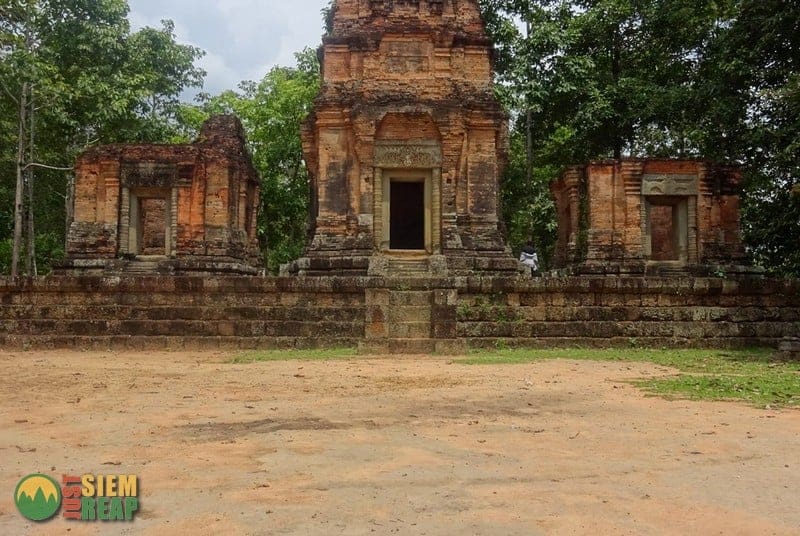 Prasat Bei is located on the moat of Angkor Thom near the South Gate. It’s only a few hundred metres from Phnom Bakheng, Baksei Chamkrong and Thma Bay Kaek.

You’ll need your walking shoes for this temple! Just before you get to the Angkor Thom South Gate causeway, you can stop your driver, turn west and walk the 100m or so to Prasat Bei. If you’re cycling, then you can ride up to the temple. You can also cut through the jungle and get to Baksei Chamkrong this way too.

As most tours of Angkor Wat will pass through Angkor Thom at some stage, you could easily quickly stop and take a look at Prasat Bei. If you’re heading through the South Gate of Angkor Thom on your journey, then it’s only a short detour. Popular tours which come by here include the Sunrise Tour, Sunset Tour, Small Circuit Tour, and the Grand Circuit Tour.

There are no hotels in the Angkor Park. Most visitors to Prasat Bei will find a hotel in Siem Reap town. The town has grown to become a large tourist hub in recent years and you’ll find hotels to suit all tastes and budgets.

You might want to visit this temple if you want to see something different than everyone else. There’s not much to see, but it’s a nice quiet spot. So if you’re looking for a secluded spot to do some meditation or get some photos, then Prasat Bei would be a good option.

Not much is known about Prasat Bei. It’s a small and relatively insignificant temple when compared to the other temples nearby. It was built in the 10th century by King Yasovarman I as a Hindu temple dedicated to Shiva.

It’s likely that the temple was abandoned at some point in the 16th century.

Prasat Bei was rediscovered by Henri Marchal, the French explorer who dedicated much of his life to Angkor. In the 1960s, the temple was restored by the École française d’Extrême-Orient (EFEO).

Prasat Bei is a line of three towers which sits on the north-south line. The brick structures are fairly small. With all three towers combined they measure 24m x 10m.

The tops of the two outer temples are missing, but the central tower remains largely intact.

It would appear that the north tower was never actually finished. The lintels on the south and central tower show depictions of Indra. However, on the north tower, the lintel doesn’t show anything.