Neak Pean, sometimes written as Neak Poan, is a Buddhist temple which sits in the middle of a circular artificial island in Jayatataka Baray. It was built by the prolific king Jayavarman VII in the middle of the 12th century.

The temple was originally designed as a hospital, it was thought bathing in the pools here would cure disease. Each of the four pools are said to represent wind, fire, water and earth.

Nowadays, the temple is part of the Angkor Wat Grand Circuit Tour and is widely visited by tourists. 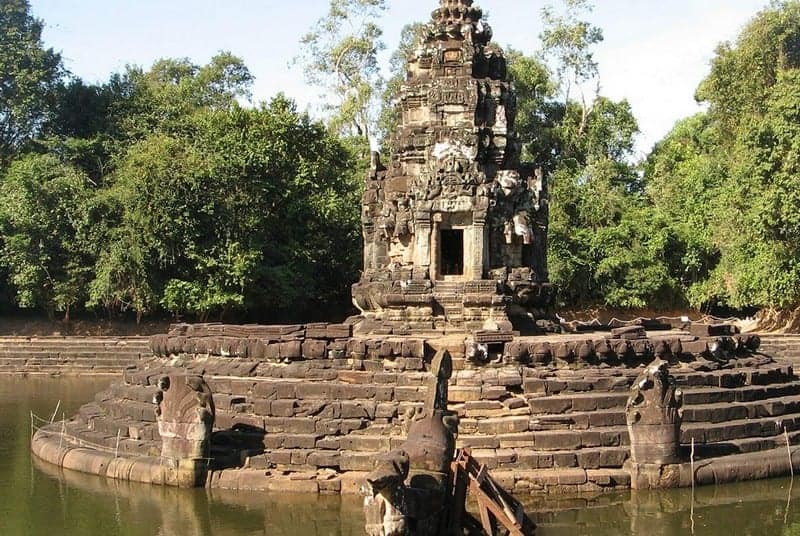 Neak Pean is located in the centre of the Preah Khan baray which is an ancient reservoir known as Jayatataka. It is located about 1km east of Preah Khan, with Prasat Prei and Banteay Prei to the North west. To the north is Krol Ko and Ta Som temple is to the east.

There are two ways to get to Neak Pean. You can either approach it from Angkor Thom in the east or Ta Som in the west.

If you’re coming from Angkor Thom, then leave the ancient city by the North Gate. Veer to the right side past Krol Romeas and Preah Khan temple. Follow the road along the baray until you reach the entrance to Neak Pean on the right side.

If you are coming from the other way, you can turn right from the Apsara Road towards Srah Srang and continue up to East Mebon. Keep heading north to Ta Som and turn left at the end of the baray. Continue along the road and you’ll see Neak Pean on the left side.

Neak Pean is on the Angkor Grand Circuit Tour and many guests will come to visit. It’s often visited after Preah Khan and before Ta Som temple. If you have time, you can also visit Krol Ko and Krol Romeas which are also nearby.

You will probably spend less than an hour at Neak Peak and often visit it in conjunction with other temples as part of a tour. If you’re exploring the temples on your own, make sure you head to Neak Pean when following the grand circuit.

There is no accommodation near to Neak Pean. As most guests will visit a number of temples during their time in the park, they will often stay in the thriving tourist hub of Siem Reap which is just a few kilometres away.

Siem Reap is home to a wide range of accommodation options. You’ll find hotels to suit all tastes and budgets.

Neak Pean isn’t as popular as other temples inside the Angkor Thom complex or those near to Angkor Wat. However, it is a popular place to visit because it’s unique and forms part of the Grand Circuit tour. The temple is in the middle of a baray where you can walk along the wooden walkway on top of the man-made lake.

If you believe in folklore, you might even improve your health after visiting Neak Pean!

Neak Pean was built by King Jayavarman VII in the 12th century as a Buddhist temple. It was thought that it was built as a hospital where bathing in one of the pools would cure disease. Each of the four pools represent water, earth, fire and water.

They are connected to a central pool (a replica of Lake Anavatapta in the Himalayas) by a stone channel. Each of these channels are looked over by an Elephant, Bull, Horse, and Lion – one of the Four Great Animals. Each channel represents the head of one of the great animals except for the east which is a human head instead of a bull.

When the temple was first built, the sculptures of the four heads sat on the floor of the lake. They can still be seen in the dry season when the water is low, but are completely covered in the rainy season.

In the 13th century, Zhou Daguan mentioned Neak Pean in his writings, The Customs of Cambodia. He was a Chinese diplomat who wrote extensively about Cambodia at the time and is one of most important documents which helps us to understand what life was like during the Khmer empire.

It’s likely that Neak Pean was abandoned at some point in the 16th century like many of the Angkor temples.

Nean Peak is a large pond 70 metres wide. It’s surrounded by four smaller ponds with a circular island in the middle. The island is made up of seven tiers made from laterite and is in the centre of the middle pond. There is a small tower in the middle of the island dedicated to Avolokitesvara.

The central island has a 14 metre diameter. The tower (or sanctuary) which stands in the middle is encircled by two serpents called nagas. They guard the east entrance to the temple. At the western side, their tails intertwine with each other and this is where the temple gets its name – “The Entwined Serpents”.

When the temple was first built, there would have been doors on each side of the sanctuary. However, at some point in history, they were closed up with only the one eastern door remaining. These false doors contain carvings of Lokeshvara, a Buddhist deity known for healing. On the east entrance, there is a depiction of Buddha.