Phimeanakas is known in English as the “Celestial Temple” and is a 10th century Hindu temple built in the Khleang style. The three-tiered pyramid style was used as a place to worship the gods.

Although smaller than other temples in the region, it’s still around 40m tall.

The name comes from a tale that the king would climb the stairs every night to lay with the Naga princess. If the Naga didn’t turn up one night, it would have been the end of the king and havoc would rain on the kingdom. 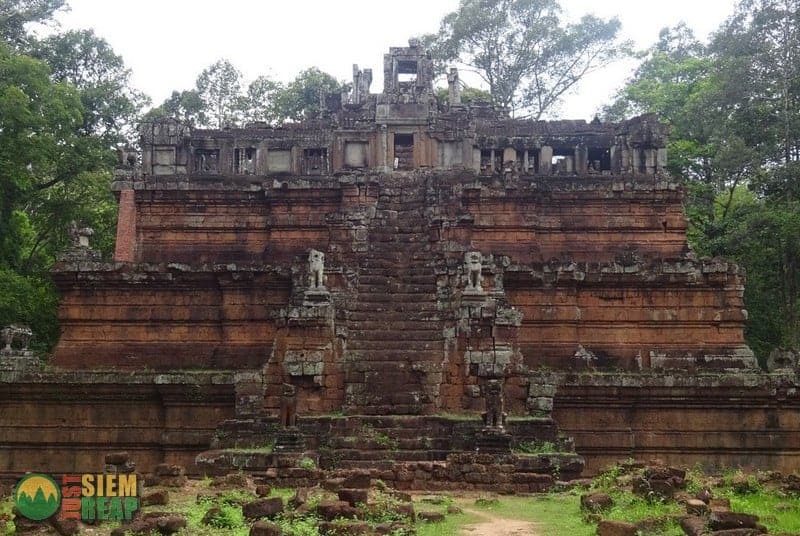 Phimeanakas temple is located inside the Royal Palace in Angkor Thom. It’s just north of Baphuon temple and West of the Terrace of the Elephants and the Terrace of Leper King. A few hundred metres to the north is Prasat Preah Palilay.

You can reach Phimeanakas on foot from Baphuon in the south, Terrace of the Elephants in the East, or Preah Palilay in the north. Most visitors will approach the temple from the East as the Angkor kings would have done. As you’re walking from the Terrace of the Elephants, keep going for around 200m. There is a path through the trees which will take you to the front of the temple.

Tours of Phimeanakas are often included in variations of the Small Circuit and Big Circuit tours. In some cases, the small tour will bypass many of the temples in Angkor Thom and just take you to the “big three” of Angkor Wat, Bayon and Ta Prohm.

Many small circuit tours do stop at other temples in Angkor Thom including Phimeanakas, it’s best to check the tour itinerary before you book.

Like all temples in Angkor Thom, there are no places to stay in the vicinity. As most tours will leave from the town and visit many temples in the area, it’s likely that you will find accommodation in Siem Reap. There are many hotels of all sizes and prices. Some popular hotels can fill up quickly in the high season, so it’s sometimes best to plan ahead.

Phimeanakas is a temple with a story and everyone loves a good story! It’s also part of the royal enclosure, so it’s likely that you’ll pass through at some point during your visit. The area surrounding the temple is thick with trees and ponds which make it feel a little cooler which is great if you’re visiting in the hot afternoon.

Phimeanakas was built at the end of the 10th century by King Rajendravarman and completed by King Suryavarman I. It was built as a Hindu temple in the Khleang style inside the Royal Palace of Angkor Thom.

It’s believed that an earlier structure was built here in the early part of the 10th century and knocked down to make way for Phimeanakas. There is an inscription which as been dated to 910 AD and mentions a structure which was dedicated to Vishnu.

Zhou Danguan, the Chinese diplomat, wrote about the golden tower and told story of the King and the Naga Princess.

It was believed that the Naga (a nine headed serpent) lived in the Golden Tower. Each night, the Naga would take the form of a woman. The king would lay with the woman every night and nobody was allowed to enter during this time. It was said that if the king failed to arrive one evening, then a great disaster would befall his kingdom. If the Naga failed to appear, then the king’s days were numbered and he would die.

The temples at Angkor were all deserted at some point in the 16th century and Phimeanakas was the same. It’s not exactly known why the Khmer deserted these great structures.

The French explorer, Henri Marchal, discovered a broken stela which was apparently written by King Jayavarman VII’s second wife. It tells us about the king and his both his first and second wives. The queens had an important role in spreading the Buddhist religion across the kingdom. The stela also shows battles between the Khmer and the Chams as well as King Jayavarman VII’s coronation.

Most of the structure remains intact and has been open to tourists for years. It’s widely visited and welcomes thousands of visitors each day.

At the entrance on the east, there is a building with a single tower. Here you’ll find an inscription which was dated to 1011 AD and contains an oath of allegiance to the king. This would have been the most important entrance as it was where the king would enter the temple.

The main structure is a pyramid consisting of three tiers with each one slightly smaller than the last. The bottom tier is 35m x 28m and the top on measure 30m x 23m. There is a steep stairway leading to the top. The stairway is guarded by lion statues. At the corners of the tiers, there are elephant statues.

At the top, there is a platform with small galleries. These small galleries were later used on a much larger scale in Angkor Wat. In the middle, there are ruins of what would have been a tower. It’s likely that this dilapidated stone structure was built to replace an original structure made from wood. This would have been the “Golden Tower” which was described by Zhou Daguan and where the Naga would appear each night.