Preah Palilay is a small structure located just north of Phimeanakas in Angkor Thom. It contains elements from both Hinduism and Buddhism. There also aren’t any inscriptions to help date Preah Palilay, so the exact date is unknown.

Located inside Angkor Thom, Preah Palilay is often overlooked by many visitors. However, the unique structure, the surrounding thick jungle, 7-headed nagas, and headless guards create an eerie-feel and a must-see temple. 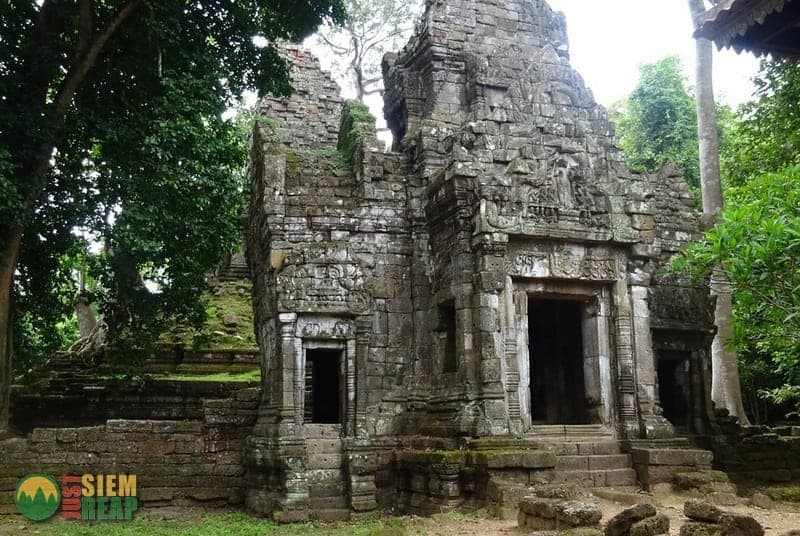 Preah Palilay is located around 400m north of Phimeanakas and 350m west of Tep Pranam inside the ancient city of Angkor Thom. It’s a little away from the main road going towards the north gate, but worth venturing through the forest to have a look.

To get to Preah Palilay, you can walk north on a small path from Phimeanakas. Alternatively, you can keep heading north towards the North Gate of Angkor Thom and head west when you get past both the Terrace of the Elephants and the Terrace of the Leper King. The entrance to the path is opposite Preah Pithu and some small shops and restaurants. This is a popular parking area for tour buses and tuk tuks. It’s also a popular spot to stop for lunch.

Preah Palilay isn’t often featured on tours. However, both the Angkor Small Circuit Tour and the Grand Circuit Tour pass right by it. The small circuit often stops at Phimeanakas and you can take a short detour to get to Preah Palilay.

If you’re on a private tour or you’re exploring the temples by yourself, then ask your guide or driver to stop when you’re either visiting Phimeanakas or Tep Pranam. If you’re on a shared or group tour, it’s unlikely that you’ll be visiting Preah Palilay unless it is mentioned on your itinerary.

There are no hotels in the Angkor Park and most guests will find a place to stay in Siem Reap town. There are plenty of hotels of all sizes and budgets to choose from. You will find many special offers and deals all year round.

The unique chimney like tower is reason enough to spend some time visiting the area. There is also a small Buddhist monastery just behind the temple, so you’ll often see monks relaxing in the area. The temple is also a little away from the main crowds who visit the popular temples, so it can also be a nice escape.

Preah Palilay lacks a foundation stele or incriptions. The temple also contains both Hindu and Buddhist motifs. This makes it very difficult to know exactly when it was built. Many historians attribute the temple to Jayavarman VIII.

However, during his reign he reverted from Buddhism to Hinduism, so it’s unlikely that he would have ordered Buddhist carvings. Therefore, it might be possible that different parts of Preah Palilay were built at a different times. The tower could have been built in the 12th century and the entrance gate (gopura) in the 13th or 14th centuries.

Like many of the other temples in the area, it’s believed that Preah Palilay was abandoned at some point in the 16th century.

Preah Palilay was rediscovered by French explorers in the late 19th century. Just after World War 1 in 1918 – 1919, Henri Marchal cleaned the area. Just before World War Two in 1937 – 1938, the temple was restored using as much of the original materials as possible by Maurice Glaize.

The causeway leading into the temple is around 30m long and approaches the sanctuary tower from the east. On each side of the causeway, there are seven-headed nagas holding a long snake-like serpent acting as balustrades. At the end of the terrace there would have been two lion statues guarding the temple. However, only one is visible today.

The sanctuary tower is enclosed by a 50m square laterite wall with the entrance building (gopura) on the east. The gopura contains a single tower with a large entrance with two smaller entrances on either side. Here you will see a seated Buddha, a reclining Buddha and many Buddhist stories. The stories include the subduing of the elephant Nalagiri, a scene where Buddha gives away his two children.

There are also Hindu sculptures in the Gopura including Indra riding on Airavata. The god of sky, water and the oceans – Varuna – is also on display here.

One of the most striking features of Preah Palilay is the 6m chimney like tower. It looks like nothing else built during the same period and for this reason alone, the temple is well worth visiting. You can enter the tower from each of the four sides. However, the inside of the temple is filled with large stones and it’s not easy to access.