Banteay Srei temple is one of the most popular temples in Siem Reap. It’s known as the “lady temple” or the “pink temple” and is a 10th century Hindu temple dedicated to Shiva.

It’s often said that Banteay Srei is the “jewel of Khmer art” because of all the intricate carvings. In fact, the name means the “citadel of the women” and this modern name comes from the belief that the carvings are so fine that they could only have been done by the hands of a woman.

Uniquely, Banteay Srei wasn’t built by a king. Instead, it was constructed by two courtiers named Yajnavaraha and Vishnukumara who were counsellors to Rajendravarman II. 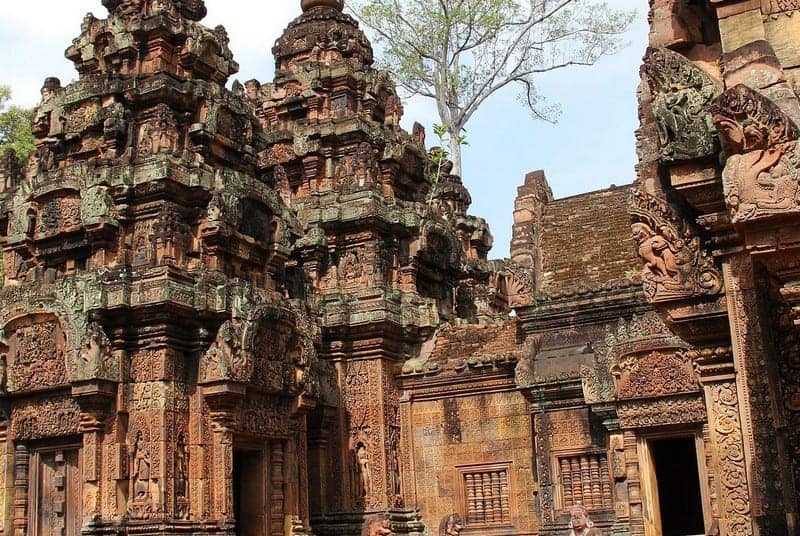 Banteay Srei is located about 35km away from Siem Reap. You can head out through the Angkor Park via Srah Srang and Preah Dak and then head north along Road 67.

Alternatively, you can take Road 6 towards the Roluos Group and then turn north along Road 66.

Most people will either take a tuk tuk or a taxi to get to Banteay Srei.

However, if you’re a keen cyclist, then the 35km ride won’t put you off. Remember, that you have to cycle back again, so the total distance will be closer to 70km. You should only attempt this if you are a fit enough to make the return journey. Remember, it gets very hot in Cambodia, so remember to bring a lot of water with you.

Banteay Srei can be combined with a number of tours. Many guests decide to combine a trip to the temple with the Grand Circuit Tour.

The Cambodian Landmine Museum and the Butterfly Centre are also nearby.

Banteay Samre is also a popular choice to combine into one trip. Moreover, Kbal Spean and Phnom Kulen are often combined with Banteay Srei into one tour as they are also nearby.

You won’t find many places to stay in the vicinity of Banteay Srei. There are a couple of local guest houses and homestays in the area. However, most tourists will opt to find accommodation in Siem Reap and make the 30km journey to the temple from town.

Banteay Srei is one of the most popular temples on the tourist trail, and for good reason. The beautiful carvings, the unique style, and the fact that it can be combined with so many tours makes it a popular choice for visitors.

You’ll need a temple pass to visit this temple, so it’s a good idea to combine it with other temples so that you get good value for money. It’s not too far from the town but it doesn’t attract the thousands of visitors which the temples closer to Angkor attract. Therefore, it can be a refreshing change to visit Banteay Srei away from the large crowds.

Officially, Banteay Srei was completed on the 22nd April 967 AD. The temple was dedicated to Shiva as were many of the temples built during this time.

The more modern name “Banteay Srei” was given to the temple because the intricate carvings. The name means “citadel of the women” or “citadel of beauty” in reference to these bas-relief carvings which contain many carvings of devatas.

In the early part of the 12th century, Banteay Srei was expanded. The temple remained in use until at least the 14th century. Although it’s not known exactly when the temple was abandoned, it’s thought that it would have been around the same time as the other Angkor temples in the 15th – 16th century.

In 1914, Banteay Srei was rediscovered. After World War One in 1923, the French writer and minister, André Malraux, stole four devatas. He was caught and the four devatas were returned.

In the 1930s, the temple was restored using as near to the original methods as possible.

During the Khmer Rouge (1975-1979) and the following civil war, the temple was ravaged by looters.

Drainage systems were installed between 2000 and 2003.

The temple has grown to be one of the most popular temples in the Angkor Archaeological Park and attracts many hundreds of visitors each day.

Banteay Srei was largely made out of pink sandstone. Brick and laterite were used for some walls and structural parts. The temple is known as the “pink temple” and this name comes from the colour of the sandstone. The sandstone was used because it could easily be carved.

There are three enclosures which contain some beautiful carvings. There are scenes depicting Hindu stories including where a demon seizes Sita, Rama’s wife. Another popular scene depicted in the second enclosure shows a fight between Vali and Sugriva, the monkey princes. There are many carvings which show many scenes from Hindu mythology.

The first or inner enclosure is the most decorated part of Banteay Srei and it’s also the part which as been the most successfully restored. This part of the temple was only open to visitors from 2010, but parts of it are still inaccessible to visitors.

There are two libraries made from brick. The carvings here are some of the most superior of any carving done during the Khmer empire. They show true craftsmanship which you won’t see at any other temple.

There are scenes showing Shiva in his home, Mount Kailash, with Uma sitting on his lap. The scene also contains the heads of animals and humans, many lions and Ravana – a ten-headed demon.

There is another scene showing Shiva. This time, he is looking at Kama, the god of love. Again, there are carvings of mythological beings and people.

There is also a sanctuary with six stairways leading up to a platform which is guarded by kneeling statues of humans with animal heads.

Unfortunately, most of these are replicas. The originals having either been stolen or taken away for safekeeping in museums.