Baksei Chamkrong is a small temple just outside Angkor Thom near the south gate. This 10th century temple was built in a pyramid style with a single tower.

The name translates into English as “the bird that shelters under its wings” from a Khmer story that the king was protected by a large bird.

The tower isn’t very tall, but the narrowing stairs and incrementally smaller tiers make it look taller than it actually is.

Baksei Chamkrong is often rarely visited. Visitors that do visit the temple, stop for a quick look on their way to the bigger temples inside Angkor Thom.

Harshavarman I started construction. It was completed by Rajendravarman II. 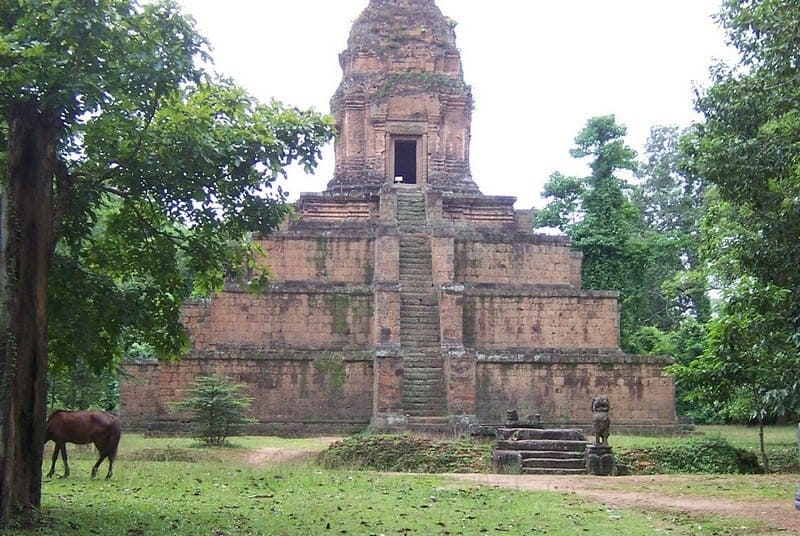 Baksei Chamkrong temple is located less than 100m from the South Gate of Angkor Thom. It’s only about 150m from Phnom Bakheng. It’s a little away from the road, but can still be seen as you drive past it. The temple is also less than 2km away from Ta Prohm.

As Baksei Chamkrong is nearby to Angkor Thom and Angkor Wat most visitors will stop by along the way to other temples. To get here, just follow the road north from Angkor Wat and stop just before the moat at Angkor Thom which leads to the South Gate.

As this is a relatively small temple, you probably won’t spend much time here. Instead, you’re likely to enjoy the temple as part of a larger tour. It could be incorporated into the Small Circuit Angkor Tour or even the Grand Circuit Tour. There are also other itineraries which feature temples in and around Angkor Thom.

Ask your guide or driver to stop along the way. It’s likely that you’ll only spend 15-30 minutes exploring this temple.

If you’re cycling on your tour, you might want to stop for a breather and escape the hot sun before continuing your journey into Angkor Thom. Many tours bypass this temple, so if you’re with a tour group on a shared tour, you might not get to see it.

You’ll find plenty of places to stay in Siem Reap town which will suit all budgets and styles. There are small guest houses to large 5 star resorts and everything in between.

Baksei Chamkrong is much quieter than other temples in the region and this gives you a great opportunity to explore in peace. You can take a look around, get some photos and relax without thousands of other people around you.

Baksei Chamkrong Temple was completed in 968 AD by King Rajendravarman II. King Harshavarman I started construction of the temple and dedicated it to his father Yasovarman. It was also dedicated to the Hindu god Shiva.

The legend of the temple is that a huge bird came and sheltered the king under his wings during a battle. The name literally translates as “The Bird Who Shelters Under Its Wings”.

Other than this, not much is known about the temple.

Prasat Baksei Chamkrong looks larger than life due to building techniques implemented. The design features help the temple to look taller than the 15m it actually is.

The steps were narrowed at the top to give a perspective of height. Also, each of the four tiers are smaller than the one below it. Again, this adds to the perception that the temple is higher than its real height.

The temple was one of the first to be built using laterite and bricks with sandstone decoration. Much of the structure has long since disappeared. There would have been a brick enclosure with an entrance building (gopura) on the east of the temple.

The temple was originally “protected” by stone lions. However, there is only a single lion which remains today.

At the top there is a tower with a door which opens to the east.

There are carvings of Indra and a three-headed elephant called Airavata which can still be seen today. There are also inscriptions which refer to the early Khmer kings as legends including the popular Jayavarman II. There are also stories of a large golden statue of Shiva which was dedicated in 948 AD.

A reclining Buddha image was added at a later date. Although the exact date is unknown, it might have been added during the 12th century as Cambodia transitioned into a Buddhism.