These two buildings were built to the east of the Royal Square in Angkor Thom. The name means storage but it’s unlikely that they were used for those purposes.

There are two structures, one to the north and one to the south of Prasat Suor Prat. Collectively, they are known as the North and South Khleangs, or just The Khleangs.

Both Khleangs are rarely visited by tourists and best viewed from a distance. 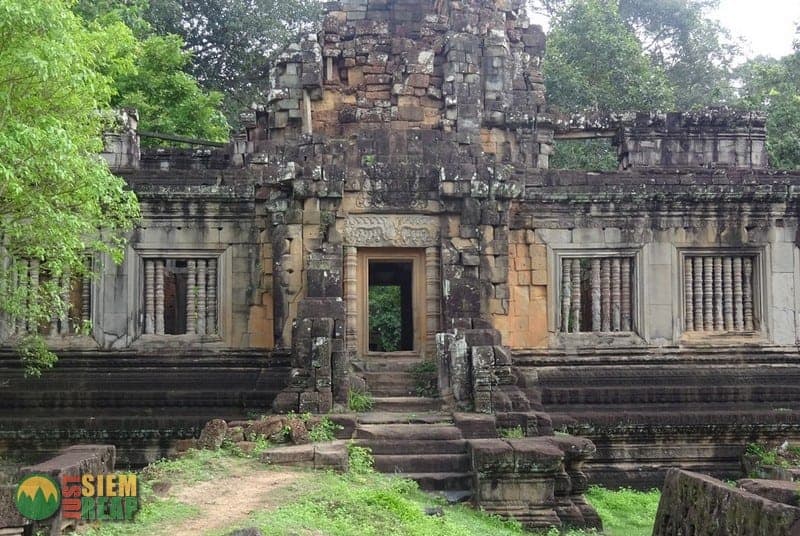 Both structures are easily accessible and not far from Siem Reap town. There is also ample space in the area. You can take any form of transport from bicycle to a large tourist bus. To reach the area, you can park nearby the terraces and walk over to both Khleangs which are just a hundred or so metres away.

Nearly all Angkor Wat Tours will pass through Angkor Thom at some stage. This is also a popular area to stop and enjoy lunch or breakfast. Most tours won’t stop at the Khleangs, but if you’re on a private tour or you’re getting around the temples on your own, then you can make a small detour to go and have a look.

If you are on a shared tour or a group tour, it’s unlikely that you’ll get the opportunity to stop here.

Both structures are fairly unremarkable when considering the nearby temples. However, the area is perfect to stop for a break and there are many places where you can buy food in the area. It would make a good place to stop and take lunch.

The Khleangs do look nice when viewed from a distance, so you might want to take a quick stop to get some landscape photos with the surrounding environment.

The two temples were built in the late 10th and early 11th centuries by Kings Jayavarman V and Suryavarman I. They were not built at the same time, the North Khleang was built a few years before the south.

The North Khleang was first built in wood by King Rajendravarman II, but Jayavaman V rebuilt the structure you see today using stone. The function of the original structures isn’t known. However, it’s thought that they were used as housing for visiting noblemen.

Not much is known about the history of these structures, but it’s thought that like the other temples in the area they were eventually abandoned at some point in the 16th century.

Both buildings are rectangular and made from sandstone. They differ slightly in their design with the South Khleang being a little narrower than the north.

A royal oath of allegiance is carved into the doorway indicating that it may have been used for visitors. The name Khleang means storeroom, but it’s unlikely that they were used for this purpose.

The North Khleang contains the most well-preserved carvings, but both are fairly uninteresting close up. It’s better to view them from a distance where they look more remarkable.

The South Khleang was never completed.