Prasat Kravan is a 10th century Hindu temple which was originally dedicated to Vishnu. There are five brick towers which are oriented to the east and surrounded by a small moat. Unusually, the temple wasn’t built by the king, instead it was constructed by high ranking officials during the reign of King Harshavarman I or Ishanavarman II.

The temple is often included in both the Grand Circuit and Small Circuit tours. If you have time on your tour, then it’s one definitely worth visiting. Prasat Kravan is in pretty good condition and its symmetry and lines make for a great photo opportunity. 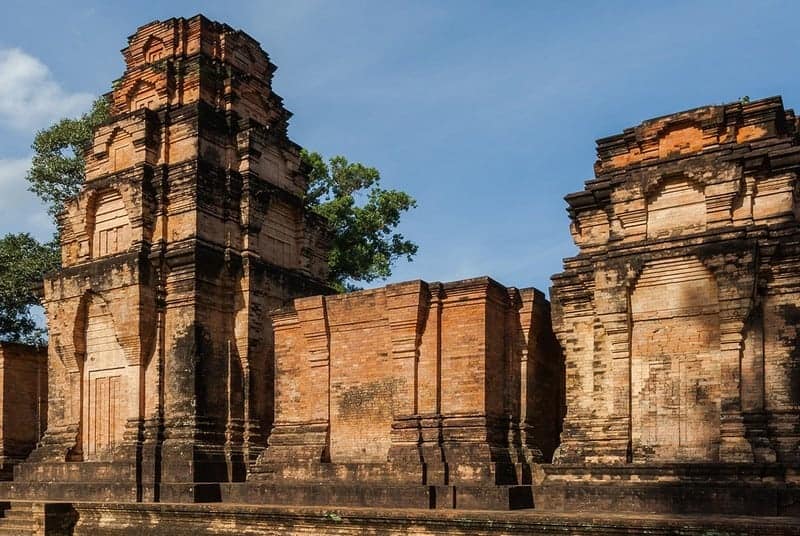 If Prasat Kravan is your first stop when entering the park, then arrive to Angkor Archaeological Park by the Apsara Road. Turn right and then after around 1.5km you’ll see Prasat Kravan on your right.

Many guests will visit Prasat Kravan on the small or grand circuit tours. If this is the case, then it will usually be the last temple of the day before you go back to your hotel. Most tours will go around the temples in a clockwise fashion. If you decide to do the temples in reverse order, then it will be the first temple on your tour.

Prasat Kravan is often featured on both the Small Angkor Wat Circuit and the Grand Angkor Circuit tours. It’s not as popular as temples such as Bayon or Ta Prohm, but it’s definitely worth a visit.

You wouldn’t usually come to the park just to visit Prasat Kravan because even if you take photos of everything here, you’ll be done in an hour or so. You might want to combine Prasat Kravan with other temples in the vicinity such as Prasat Bat Chum and Banteay Kdei.

There are no hotels located inside the Angkor Archaeological Park and most guests will stay at a hotel in Siem Reap town. Siem Reap has become a large tourist town and there are hundreds of hotels to choose from. You will find everything from small and cheap guest houses to large luxury resorts.

You should visit Prasat Kravan because it offers a unique architectural experience which is rarely found in Khmer temples. The bas-reliefs are also still in pretty good condition.

Although Prasat Kravan is fairly popular with guests, it isn’t the most popular. This means that you can still get some great photos without lots of other tourists getting in the shots. The symmetrical towers also make for a good photo opportunity.

Prasat Kravan was built in 921 AD (10th century) by high-ranking officials under the reign of Harshavarman I or Ishanavarman II. The temple was originally dedicated to Vishnu. Other than this, not much is known about the temple or what it was used for.

Like most of the temples in the region, it is thought that Prasat Kravan was abandoned at some point in the 16th century.

In the 1930s, the site was cleaned by two French explorers – Georges Trouve and Henri Marchal. Work on the site was interrupted by the Japanese invasion during World War 2. In the 1960s, the site was restored by Bernard Philippe Groslier and his team. Some new bricks were added this time. These new bricks are easily identifiable as they were marked with the acronym “CA” which stood for “Conservation Angkor”.

There are five sanctuary towers which vary in size. The central tower is the largest and the outer towers are the smallest. All of the towers face the east and sit on the north-south line. The temple is surrounded by a moat.

The interior of the towers are also unique to Khmer architecture. The are large depictions of the Hindu gods Lakshmi and Vishnu which have been carved directly into the brick walls. This type of sculpture is more common with Cham monuments rather than Khmer temples.

The moat is crossed from the west over a small causeway. You’ll then see the five towers which sit on a raised terrace. There was likely to have been an entrance gate here, but it was probably made from perishable materials such as wood or bamboo.

Lion statues would have been located outside the stairway leaving to each of the towers. However, only a few remain and most are not visible today.

There is an inscription on the entrance to the central tower which mentions that the temple was dedicated to a statue of Vishnu in 921 AD.

What makes Prasat Kravan quite a popular temple is the quality of three bas-reliefs which feature Vishnu. Two bas-reliefs feature a four-armed Vishnu. On one, he is sitting and holding a baton, discus, conch and globe. In the second he is holding the same items, but he is standing and appears to be making a large step. This bas-relief tells the story of Vishnu embodying a dwarf called Vamana and is taking three large steps to claim the world.

In the third bas-relief, there is an eight-armed Vishnu. Here, he is surrounded by his devotees. This bas-relief also features some kind of lizard.

There are also two bas-reliefs of Lakshmi in the north tower. Lakshmi is the consort of Vishnu. In both of these depictions, the goddess is surrounded by her followers. In one, she is holding Vishnu’s discus and Shiva’s trident. In the other, she is holding lotuses.