West Mebon temple is located in the centre of the man-made West Baray reservoir outside of Siem Reap town. It was a Hindu temple which was thought to have been built in the 11th century during the reign of kings Suryavarman I and Udayadityavarman II.

In the rainy season, the temple is situated on an island and you must take a boat to reach it. However, in the dry season, it is reachable by land.

The temple is in poor condition, but does have some carvings. Here, you can see some of the earliest examples of carvings which feature animals. 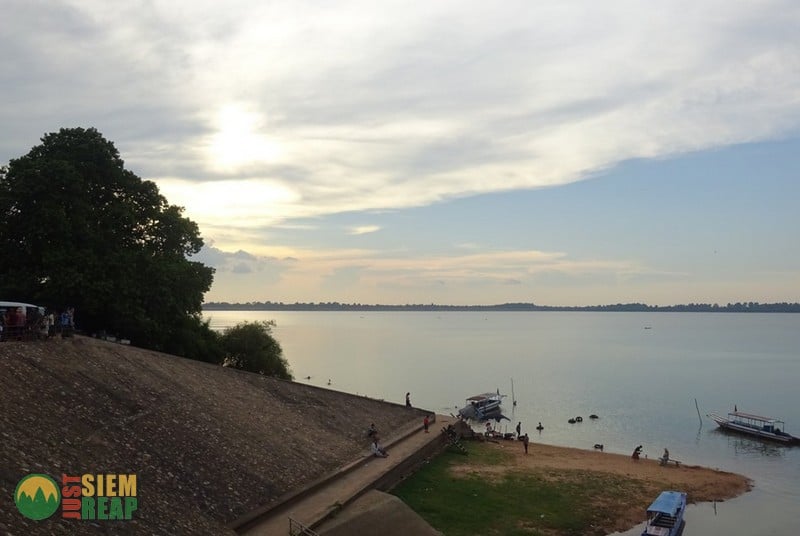 West Mebon is located in the middle of the West Baray reservoir. It’s located around 12km outside of Siem Reap town along the national road 6 going towards Battambang. It’s just a few kilometres away from the Siem Reap International Airport.

You should leave Siem Reap along the National Road 6 heading towards the airport. When you reach the roundabout which takes you to the airport, continue straight along Road 6. Keep going for another kilometre or so before turning right.

Follow this road all the way to West Baray and you’ll come across the reservoir directly in front of you. From here you can take a boat to West Mebon temple.

There are a few tours which go to West Mebon. It’s best to combine a trip to this temple with other temples and attractions in the area including West Baray, Ak Yum temple, and the Angkor Silk Farm.

There aren’t many places to stay around the West Baray and due to its close proximity to Siem Reap town, most visitors tend to stay in town and travel to West Baray. You’ll find many hotels in town to suit all tastes and budgets.

West Mebon is in poor shape and is quite difficult to reach. Therefore, most visitors don’t come to see West Mebon. However, if you’re up for a little adventure, then it’s a great way to see a temple which few others venture out to see.

Although unconfirmed, it is thought that West Mebon was built during the reign of kings Suryavarman I and Udayadityavarman II in the 11th century.

In 1936, a part of a statue of the reclining Hindu god Vishnu was found. This fragment was part of what was the largest bronze sculpture made during the Khmer empire. The fragment includes the head, torso and two right arms of Vishnu.

The story goes that a local villager had a dream that a statue of Buddha was buried here and subsequent digging unearthed Vishnu.

Zhou Daguan, a Chinese diplomat who wrote extensively about the Khmer in the 13th century, mentions West Mebon in his writing. However, it’s thought that he confused the West Mebon for the East Mebon.

West Mebon is built on a square design about 100m on each side. There are three towers which are around 30m apart from each other. In the middle there was a stone platform which connected to the eastern wall and causeway.

Nowadays, much of the platform, causeway, east wall, and towers still remain. However, not much is left of the other parts of the structure. Outlines of the structure are only visible when the water is low.

The towers are adjourned with carvings of animals which are set in squares. The only other place where you can see similar carvings are at Baphuon temple.