The unusual name comes from a 15th century statue which was discovered at the site. The statue of the Hindu god Yama was completely covered in moss and locals thought it resembled somebody with leprosy.

It is thought that the 12th century terrace was used as a cremation site for the royal family. 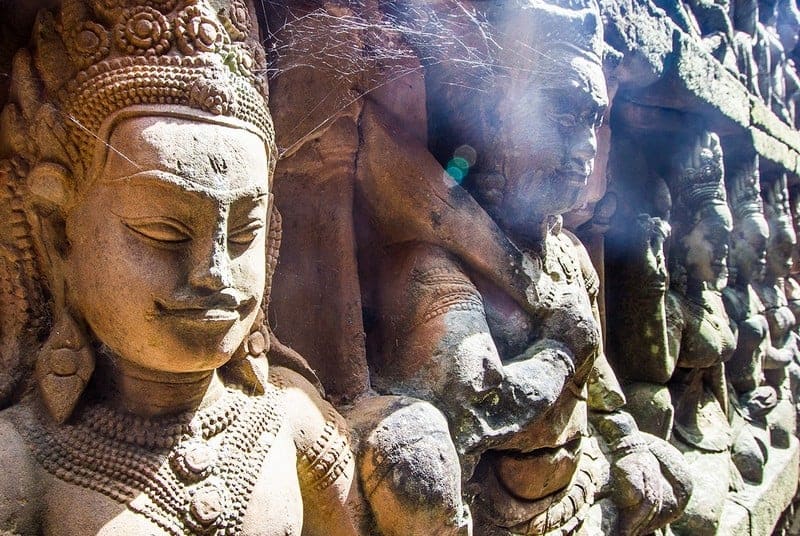 The Terrace of the Leper King is located in the Royal Square inside the ancient city of Angkor Thom. It’s around 600m north of Bayon temple. Other nearby temples include Phimeanakas, Baphuon, Suor Prat Tower, North Khleang, Tep Pranam, and the Preah Pithu Group.

There are no hotels inside the Angkor Park and it’s impossible for visitors to stay here. However, the tourist town of Siem Reap is just a few kilometres away and has hundreds of hotels to choose from. You will find hotels to suit all tastes and budgets with many special offers all year round.

Why Visit Terrace of the Leper King?

The Terrace is one of the most visited sites in the Angkor Park because it is located at the “hub” which takes you either east or north. If you head east, you’ll likely follow the path of the small circuit tour. Whereas, if you’re heading north, you’ll probably be taking the grand circuit. Whichever way you decide to go, you’ll go past this spot.

Not much is known about this terrace and what it was used for. What is known is that it was built in the late 12th century by King Jayavarman VII. It’s believed that it was used as a royal cremation site, but this can’t be confirmed.

Features were added to the terrace at later times. When it was built, it would have been a Buddhist structure. But a statue of the Hindu god Yama, who is the god of death in Hindu mythology, was added in the 15th century.

It is thought the name comes from this statue because when it was found it was completely covered in moss. The locals thought it resembled someone with leprosy. There is also the legend of King Yasovarman I, who apparently suffered from leprosy.

The structure was built in a “U” shape which was believed to be a representation of Mount Meru – the home of the gods in Hindu mythology.

The terrace is 25m long and completely covered in carvings, mostly of female celestial beings, garudas and naga snakes.

On the top of the terrace is where the “Leper King” statue was found. Nowadays, you’ll see a copy of the statue as the original is stored away for safe keeping.