Banteay Kdei is a 12th – 13th century temple built by King Jayavarman VII. In English, the name translates to “A Citadel of Chambers”. The temple is actually made up of a number of complex chambers and passages.

Although it’s located near Angkor Wat and Ta Prohm, it is far less visited and seems to be ignored by most visitors.

However, Banteay Kdei is a “hidden gem” and the overgrown ruins, complex design, and relative peace make is a great place to visit. 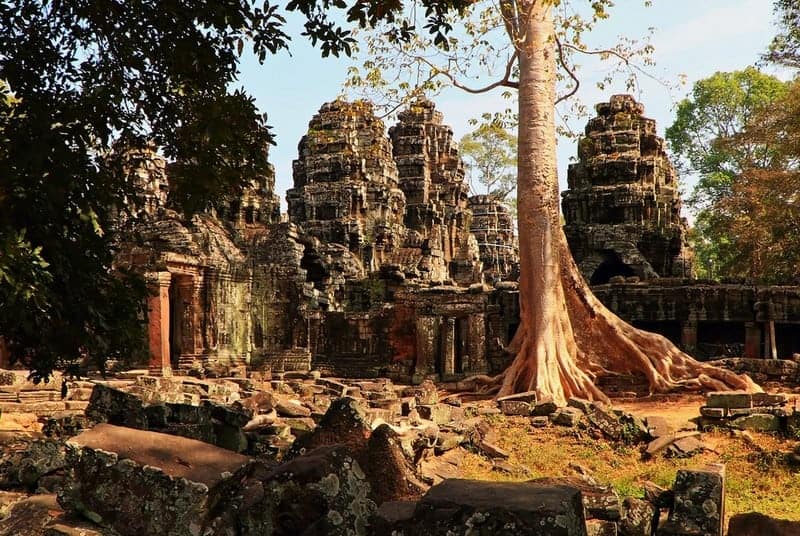 Banteay Kdei is located inside the Angkor Archaeological Park just to the south of Ta Prohm temple. It’s also located next to Srah Srang, an ancient man-made reservoir built to provide water for the people living in the area.

Banteay Kdei is considered to be one of the main group of temples in the Angkor complex. It’s only a short distance from Angkor Wat, Ta Prohm and other popular temples in the regions.

It’s easily accessible by road, so you have many options to get there including bicycle, tuk tuk, taxi, and more. All drivers will know where this great temple is located and it’s easy to find if you decide to make your own way there. You can see its exact location on the map below.

Banteay Kdei isn’t as popular as some of the other famous temples. Therefore, this temple is much easier to explore without the masses which visit Angkor Wat, Bayon, and Ta Prohm every day.

The tour is is featured on some Small Circuit Angkor Wat Tours. If you’re visiting the temples for a day and you’ve already seen the “big three”, then ask your guide to take a small detour to Banteay Kdei as it is nearby.

If you’re considering the Angkor Wat Grand Circuit Tour, then you might want to arrive to Srah Srang a little earlier to give you some time to explore Banteay Kdei.

As the temple is located in the Angkor Park, it’s likely that most visitors will look for accommodation in Siem Reap town. Tourists are not allowed to stay in the Angkor Park, but you may find some homestays available with local families who still live in the area.

Siem Reap is a large tourist hub and you will find accommodation to suit every taste and budget.

Visiting a temple without the large numbers of tourists which descend on the more popular temples is a refreshing experience. Less tourists also mean that it’s easier to get some great photos of the temples without people standing in your way.

You might also want to see the sunrise here as it’s much quieter than the sunrise at Angkor Wat.

Srah Srang is also a popular destination to see the sunset. It would be a good idea to explore Banteay Kdei before taking your spot to see the sun go down over the large man-made reservoir at Srah Srang.

The original name for Banteay Kdei was Kuti which was mentioned in a carving in Sdok Kak Thom which is a Khmer temple located in Thailand. The carving tells the story of Jayavarman II who created an estate called Kuti.

Although many temples built before the 12th century were Hindu, this late 12th century temple was built as a Buddhist temple by King Jayavarman VII. The king dedicated this temple to Bodhisattva Avalokitesvara in the style of Ta Prohm and Preah Khan.

Many of the Buddhist temples constructed by Jayavarman VII were vandalised in the 13th century. However, some of the Buddhist lintels are still in relatively good condition.

Rediscovery in the 20th Century

After the Khmer empire ended, Banteay Kdei was left neglected and the jungle gradually took over. It wasn’t until the early 20th century, just after World War One, that the temple was uncovered again. The “Conservator of Angkor”, Henri Marchal oversaw the work to uncover this great temple.

The temple was again inhabited by Buddhist Monks up until the 1960s.

Like most temples, it was again left alone during the tragic Khmer Rouge era and the subsequent civil war years.

In the early part of the 21st century, archaeological research at Banteay Kdei uncovered fragments of nearly 300 sandstone Buddhist statues.

In 2004, work to scan and restore the structures at Banteay Kdei was started by the University of California, the Sophia University of Tokyo, and CyArk. Although many parts of the temple have been restricted to visitors, the temple has generally been made safe for people to visit.

Banteay Kdei is made up of three enclosures within a large compound which measures 300m by 700m. The compound walls were made using laterite. You enter the temple, as is usual in Khmer architecture, from the east.

The single-level temple is a treasure trove of complex chambers and enclosures.

The external enclosure has gopuras (entrance buildings) at each of the four corners. There is a moat which is full of statues of lions and Nagas. There is an image of Buddha at the entrance of the moat which is significant because most of the other structures have either been looted or have decayed over the years.

There is a “cruciform” enclosure which contains three passages with laterite walls. There are large apsara devatas which look like they are dancing. The Buddhist statue here was vandalised. It’s thought that his happened some time in the 13th and 14th century during the Hindu uprising.

The next enclosure is part of the main temple. The entrances are like a gallery with a row of pillars which open up into a courtyard.

The walls here are full of apsaras. Again, the Buddhist statue in this enclosure was vandalised. Here you can clearly see the Bayon architectural style.

Finally, the inner enclosure has four towers with galleries which link them together. Here, you will see a sitting Buddha statue.