Pre Rup is a 10th century Hindu temple built by King Rajendravarman. The temple mountain is underrated and not as widely visited as other temples in the area. However, the beautiful brick structure is a must-see for anyone visiting region.

The name Pre Rup translates into English as “turn the body” and it’s believed that funerals took place here. In fact, it’s thought that the whole building was a giant ancient crematorium. In traditional funerals, the body was rotated at various points through the service, hence the name.

Nowadays, you should take the time to explore the temple as it is in excellent condition and you can explore in relative peace and quiet when compared to other more popular temples. 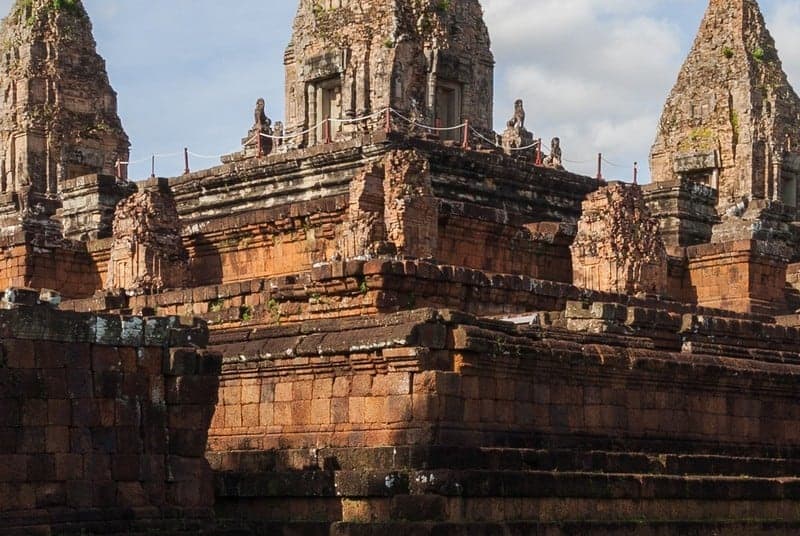 Pre Rup is located south of the East Baray. It’s directly south from the East Mebon temple which is located on an island in the middle of the baray. Both temples were created by Rajendravarman. Pre Rup temple is a few kilometres east of Srah Srang.

If you’re coming from Angkor Thom or Ta Prohm, then you should head towards Srah Srang. Continue heading east and you’ll come across Pre Rup on the left side.

If you’re on the Grand Circuit Tour, then you’ll likely visit Pre Rup after East Mebon. In this instance, it will be on the right side before turning towards Srah Srang.

Pre Rup is often included on the Angkor Wat Grand Circuit Tour. You can sometimes take a small detour from the small circuit tour if you have the time, but it’s not always included so you should speak to your driver or guide.

If you’re travelling around the temples by yourself, you might want to make a “mini tour” of Ta Prohm, Kutisvara, Banteay Kdei, Srah Srang, Pre Rup and East Mebon.

You won’t find any accommodation inside the Angkor Park and most guests will find somewhere to stay in Siem Reap. The town has grown to be a large tourist hub and there are many choices for hotels from very small home stays to large 5-star resorts.

If you’re looking for a place to stay for your trip to Siem Reap, booking.com often has special offers and deals throughout the year to help you get the most value for money.

There are some great views from the top of Pre Rup. If you look to the east, you will see Phnom Bok and the mountains of Phnom Kulen. On the west, you can see the towers of Angkor Wat on the horizon.

The temple’s many towers and sanctuaries also have a unique look when compared to temples from the same period. If you’re planning a photography trip to Pre Rup, then you should visit early in the morning or late in the afternoon when the light is good for the warm colours of the laterite and brick.

Pre Rup was built as the state temple for King Rajendravarman in the late 10th century in either 961 or 962 AD. It was built only 9 years after East Mebon which is exactly 1.3km north.

It’s not known exactly what the temple was used for, but the modern name “Pre Rup” suggests that it was used for funerals. French historian, Philippe Stern, thought that Pre Rup stood at the centre of a new city built by King Rajendravarman. However, this also hasn’t been confirmed.

Pre Rup is historically significant because it was the second temple built after the Khmer capital city was moved to Angkor Thom after a period of turbulent politics. The capital was moved back from Koh Ker and then again to Angkor Thom where it remained until the end of the Khmer empire.

Like most other temples in the area, it’s thought that Pre Rup was abandoned at some point in the 16th century.

Although rediscovered in the late 19th century, Pre Rup remained overgrown and covered in soil until the 1930s. At this time, it was excavated by French explorers – Henri Marchal and George Trouve. Today, the temple remains in excellent condition.

Pre Rup has been delcared a UNESCO World Heritage Site.

The temple is thought to represent Mount Meru, the mythical home of the Hindu gods. The temple mountain structure consists of layers built in laterite and brick. The pyramid style forms the base for the five towers which were dedicated to Shiva, Vishnu and their consorts Parvati and Lakshmi.

When it was first built, the temple would have been surrounded by a moat with two enclosures. Both would have a had an entrance gate (gopura) at each side with long halls connecting the two. However, very little of these buildings remain today.

What really separates Pre Rup from the other temples are the three large towers on each side of the main (east) entrance to the temple. Only five are still visible, the first tower on the right side was either demolished or never completed. It’s believed that these temples were added at a later date, probably during the reign of King Jayavarman V. In the central you will find carvings of Indra and Vishnu. Indra is riding on Airavata, his elephant. Vishnu is on Garuda, a large mythical bird.

The Inner Enclosure and Pyramid

The inner enclosure contains two large libraries. In between these libraries, there is the remains of a pedestal which would have contained a large statue. Most likely, it would have been a statue of a sacred bull called Nandi.

In the middle, there is a stairway leading to the five towers. On each tier, the stairway was guarded by two lions. However, only the lions on the top tier are still visible today.

The Five Towers at the Top

At the very top, you will see the remains of the five towers. The central tower is the largest with four smaller temples in each of the corners. All have entrances to east with false doors on the other three sides. The towers were very ornate with lots of carvings and inscriptions. However, these are not very visible today. There would have been statues of Shiva, but these were replaced by images of Buddha which were added at a later date.