Banteay Samre is considered to be somewhat “off the beaten track” and is quite a way from the main group of temples near Angkor Wat and Angkor Thom.

This Hindu temple was built in the early 12th century by Kings Suryavarman II and Yasovarman II.

It takes a little while to get there, but it’s worth the trip. Not many people come to visit Banteay Samre and it’s like a smaller replica of Angkor Wat. It is thought that Banteay Samre was dedicated to Vishnu. 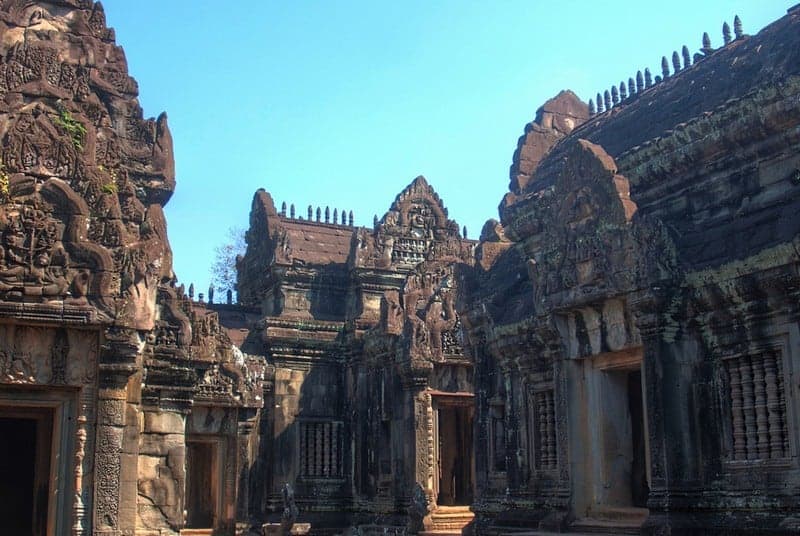 Banteay Samre is located along Road 810 a few kilometres east of East Mebon. It’s sandwiched between Roads 67 and 66 which take you to Banteay Srei temple and on to Kbal Spean and Phnom Kulen.

Banteay Samre is around 20km from Siem Reap and a little more than 10km from Angkor Wat temple. If you are a keen cyclist, you can take a cycle ride out there. At only 20km from town, it’s possible to take a tuk tuk or a taxi.

Banteay Samre is a little to far to include on the Small Circuit or Grand Circuit tour. Most tours will incorporate this temple with a trip to Banteay Srei or Kbal Spean.

It’s also possible to combine it with trips to other attractions in the area such as the Butterfly Centre, the Landmine Museum, or a countryside Tour.

Moreover, you can combine it with the Roluos Group of temples or Kampong Phluk floating village.

Visitors to Banteay Samre generally stay in Siem Reap town. There are some homestays around near Banteay Srei. It’s also quite nearby to Bakong Commune where you will also find some small guesthouses.

It’s easy to reach Banteay Samre from the town and most guests will choose accommodation in Siem Reap.

Banteay Samre temple is a little out of the way and is a much quieter alternative to the temples close to Angkor Wat. You can easily explore the temple without thousands of other people around you. This makes it a perfect choice for photography.

Moreover, Banteay Samre is a smaller version of Angkor Wat and you’ll immediately see the similarities between the two.

If you want to visit some temples and attractions a little further away such as Phnom Kulen, it can be a nice stop along the way to break up the journey.

Banteay Samre was built by Kings Suryavarman II and Yasovarman II in the early part of the 12th century. This Hindu temple was built in the same style as Angkor Wat temple. In fact, it looks like a miniature Angkor Wat.

Not much is known about the temple and most what is known is speculation. There is no real reference to the date of construction and few inscriptions have been found.

There is a story related to the temple called the “Legend of the Cucumber King”. Legend has it that there was a local farmer who grew the best cucumbers around. The king liked them so much that he told the farmer that he must kill anyone who came to his farm to eat them.

One evening, the king has a taste for these cucumbers and went to the farm. The farmer, now knowing it was the king, promptly killed him. The king died without sons, so the royal elephant was used to choose the next king.

The elephant went straight to the farm and the farmer became the next king. The new king then moved out of the royal palace into Banteay Samre.

Just like the other temples built during the Khmer empire, it’s thought that Banteay Samre was deserted at some point in the 16th century.

Just before World War Two in the 20th century, the temple was restored by Maurice Glaize and his team.

Heavy looting occurred during the Khmer Rouge regime and the subsequent civil war.

Banteay Samre resembles Angkor Wat and looks like a miniature version of the great temple. It was built at the same time as Angkor Wat.

There is an enclosure with entrance gates (gopuras) at each side. The lintels here are very well preserved and you can see carvings which feature a fight between Rama and the ten-headed Ravana. You can also see other mythical scenes featuring other Hindu gods such as Vishnu, Krishna, Indra, Laskmana, Hanuman, and others.

There is an inner sanctuary which features low galleries with an entrance gate at each side. The central tower here contains scenes from Hindu epics. There are both Hindu and Buddhist images here. However, many Buddhist carvings would have been destroyed during the Buddhist purges in the 13th century with King Jayavarman VIII came to power.