Bayon temple is like nothing else in Cambodia and it’s one of the most popular temples in the country. This is where you’ll see the famous smiling faces looking down on you from the 37 towers.

Located in the centre of Angkor Thom, it was once the state temple for Jayavarman VII. The Buddhist temple was modified by later kings and was remained an important temple until the area was deserted.

Today, people flock to see the two hundred plus faces on the towers. It’s the second most popular temple after Angkor Wat.

Buddhism (although it was later modified) 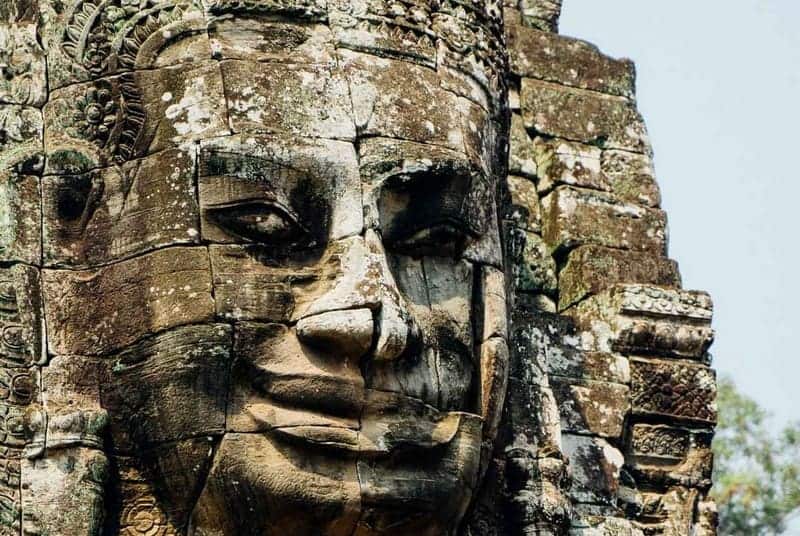 Bayon temple is located in the centre of the ancient city of Angkor Thom. Just a few kilometres from Angkor Wat, Bayon is easily accessible.

Other nearby temples include Baphuon, Phimeanakas, Terrace of the Elephants, and some smaller temples such as South Khleang and Sour Prat Tower.

If you are coming from Siem Reap town or Angkor Wat, it’s likely that you’ll enter Angkor Thom by the South Gate. Continue heading north for about 1km and you’ll reach Bayon.

The temple is popular and included on most tours of Angkor Wat. You’ll see many tuk tuks, taxis, minivans, and other modes of transport waiting around the temple. It’s also possible to cycle here, even for the most inexperienced cyclist.

The Bayon temple is featured on many tours including the popular Angkor Wat Small Circuit Tour. You can’t take a trip to Angkor without seeing Bayon and it’s usually included in the “big three” which consists of Angkor Wat, Bayon and Ta Prohm temple.

If you’re part of a tour group, choose a tour which gives you plenty of time to explore. You’ll love getting lost in the passages of Bayon. If you’re making your own way around the temples, give yourself one or two hours to explore.

You’ll find many hotels in Siem Reap bearing the same name as Bayon temple, but they aren’t anywhere near the temple. Most guests will find accommodation in Siem Reap and take the short journey to visit the temple.

No visit to Angkor is complete without seeing the famous faces of Bayon temple. You’ll see them everywhere around town, on the TV, in photos, and more. You should go to see them in person.

You can explore the three tiers, gaze up to the faces looking back down at you, and imagine what it would have looked like back in the day.

There are an impressive number of bas-reliefs and carvings which show scenes of the Khmer armies, apsaras, naval battles, fishermen, cockfights, and many other things.

There are photo opportunities around nearly every corner. However, Bayon is a very busy place to visit. If you want to escape the crowds, you might want to see Bayon very early in the morning or make it the last visit late in the afternoon.

Bayon was built by King Jayavarman VII in the late 12th or early 13th century. It was the last state temple built during the Angkor period and the only one which was a Mahayana temple dedicated to Buddha.

King Jayavarman VII built the temple to be the centrepiece of his great building program which included many temples and public works such as temples, hospitals, reservoirs and bridges.

Like most of the temples in the region, it was eventually abandoned at some point in the 16th century and the jungle slowly began to take over.

The temple was rediscovered by French explorers in the late 19th century and work was done throughout the 20th century to restore Bayon.

When it was first rediscovered, it was incorrectly dated back to the 9th century when the first city of Yasodharapura was located nearby. However, discoveries in the 20th century show that the temple was built nearly 100 years after Angkor Wat.

Like many of the temples, Bayon was looted during the civil war and Khmer Rouge regime.

It was placed on the UNESCO World Heritage list in 1992 and is a protected monument.

Nowadays, it’s one of the most visited temples in Cambodia, second only to Angkor Wat temple.

Bayon was constructed over the period of many years.

Initially, it was completed by King Jayavarman VII, but it was later extended. Therefore, Bayon is a bit of an architectural puzzle. There is a maze of towers, passages, and galleries which span across three levels.

One of the most peculiar features is the lack of an enclosing wall. There are square galleries on the first and second levels which feature stunning bas-reliefs. There is a sanctuary which sits on the third level.

The temple itself is a complex maze of passages, steps, walkways, galleries which make it difficult to know exactly where you are.

The Towers and Faces

The towers are on the upper terrace. It’s thought that the upper terrace didn’t feature in the original plans and that these plans were changed after construction had started. There were 49 towers when Bayon was first built, but only 37 remain today.

The towers feature around 200 faces. There is some discussion about who these faces belong to. Firstly, they could belong to King Jayavarman VII who like most Angkor kings, considered himself a devaraja or god king. Alternatively, the faces are said to belong to Avalokitesvara – a bodhisattva who represents all Buddhas.

The main central tower used to feature a seated Buddha who was protected by Mucalinda, the serpent king. However, it was destroyed by King Jayavarman VIII and smashed to pieces. In 1933, these pieces were recovered and put back together.