The temple was built in the Bayon style and is a Buddhist chapel. It shows some signs of vandalism which would have happened during the Hindu uprising in the late 13th century.

Ta Prohm Kel offers little to tourists and isn’t of any particular historical significance. Therefore, it’s rarely visited by tourists. This can be a good things, especially if you want to get some uninterrupted photos. 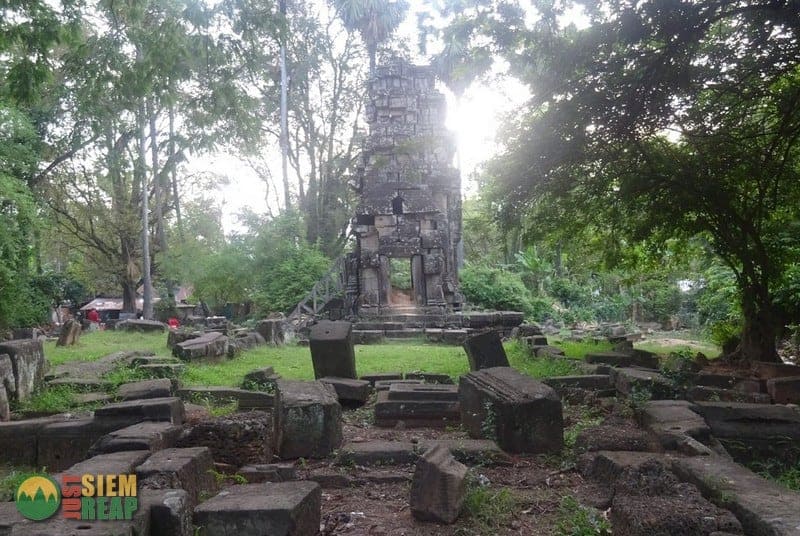 Ta Prohm Kel is located in the Angkor Archaeological Park, just north of the main gateway to Angkor Wat. It is in a small clearing behind some trees a few metres away from the main road which leads to Angkor Thom.

The temple is easily accessible from the road. Ask your tuk tuk driver or taxi driver to wait on the road and walk through the trees to the temple. If you’re cycling, you’ll be able to cycle directly up to the main temple.

As Ta Prohm Kel is small, mostly ruined and has no historical significance, it’s unlikely that you’ll see it featured on many tours. However, due to it’s proximity to Angkor Wat and Angkor Thom, it’s a quick and easy stop along the way.

If you are on a private tour of the temples, ask your guide to stop along the way. If you are on a shared or group tour, you probably won’t get the opportunity to see this temple unless it is listed on the tour itinerary.

As no hotels are allowed in the Angkor Park, you can’t stay near to Ta Prohm Kel. Most guests will find accommodation in Siem Reap and take the short journey to the park to see the temples.

If you’re looking for a quiet spot to take a break or want to see something which most visitors don’t get to see, then Ta Prohm Kel is a good choice.

Little is known about Ta Prohm Kel temple. What is known is that it was built as part of Jayavarman VII’s great construction program. It is one of the 102 hospital chapels built by the king during his reign.

Nothing is left of the actual hospital and all that remains is this small chapel which is in very poor condition.

It’s likely that the hospital and chapel were abandoned with the other temples in the area around the 16th century.

Like most Khmer temples, the small central sanctuary opens to the east. The other three sides contained false doors. There was a small entrance building (gopura) to the east. Only some traces of this gopura can be seen today.

Ta Prohm Kel was built in the Bayon style and was decorated with devatas and other Buddhist figures. Many of these carvings were vandalised, probably during the Hindu uprising in the late 13th century.

There is a small channel called a somasutra which was used for draining water used during ceremonies.

Inside the sanctuary, there are some coarse carvings. It’s likely that these were added much later.