Srah Srang is the “Royal Bath” and is a 700m by 350m reservoir which is still full with water. The “pond” is located on both the Small Circuit and Grand Circuit Tours and is a very popular spot for tourists to see the sunset.

Although built in the 10th century, it was later modified in the 12th century by the prolific King Jayavarman VII. 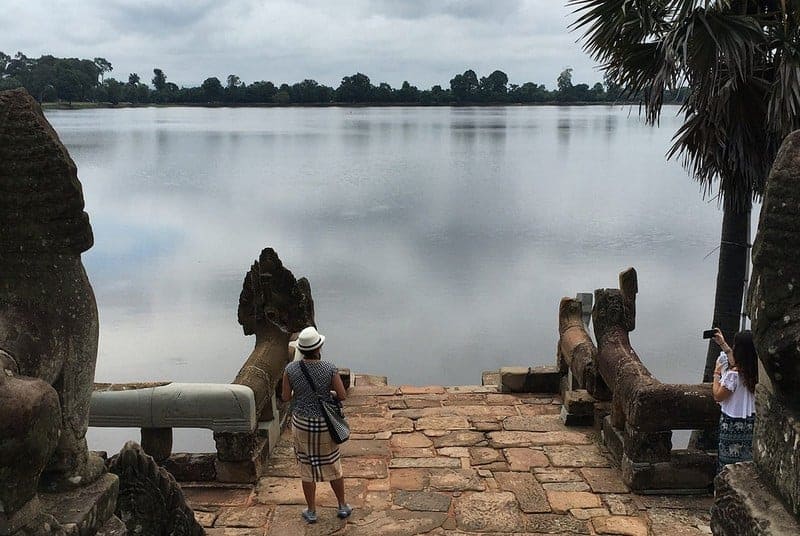 Srah Srang is located on the east side of Banteay Kdei temple. To the north west is Kutisvara temple and to the east is Pre Rup. Both the grand circuit and small circuit tour take a clockwise direction around the temples with Srah Srang usually being the last place to visit.

If you are coming from Siem Reap town or Angkor Wat, then you can head east going past Prasat Kravan. About 1km after Prasat Kravan, you’ll see the large pool of water on the right side with Banteay Kdei on the left side. If you’re coming from Ta Prohm, then head east for a few hundred metres before turning right to the south. You can’t miss the large expanse of water!

If you’re coming from the East Baray or Banteay Samre, then head towards Pre Rup and you’ll see Srah Srang on the left side about 1km after Pre Rup temple.

As stated before, both the Small Circuit Tour and the Grand Circuit Tour often end with a visit to Srah Srang. If you’re aiming to avoid the crowds at sunset, you might want to ask your guides to do the circuit “back to front” and visit Srah Srang early in the morning.

There are no hotels in the park and you can’t stay near Srah Srang. Most visitors will find a hotel in Siem Reap town. The town has grown in recent years to become a large tourist hub to support millions of visitors. There are hotels of all sizes and budgets and you’ll easily be able to find a place to stay at any time of the year.

This is one of the most popular spots to set the sunset and the sun will light up the whole reservoir. The landing stage offers the perfect place for tourists to wait and watch the sun go down.

Srah Srang was dug in the 10th century by a Buddhist minister of King Rajendravarman II called Kavindrarimathana. King Jayavavarman VII modified the reservoir in the early part of the 13th century.

It’s likely that the reservoir would have been abandoned with other temples in the region around the 16th century.

The area was cleared in the early part of the 20th century.

In the late 20th century, the viewing platform was partially restored.

King Jayavarman VII added a landing platform on the west side. Here you can see serpent balustrades lining each side with two lions standing guard. There is a large three-headed serpent and many carvings of small serpent heads.

There is a 10th century inscription which states that people must not use the water to clean their animals and not let elephants destroy the dykes.