Thommanon is a small but beautiful temple which was built around the same time as Angkor Wat and in the same style. It seems to be part of a pair of temples which includes Chau Say Tevoda. However, it’s in much better condition than Chau Say Tevoda because of the extensive restoration works carried out in the 1960s.

The carvings here are in excellent condition and are one of the main reasons why you should take the time to visit Thommanon during your visit to the temples at Angkor. 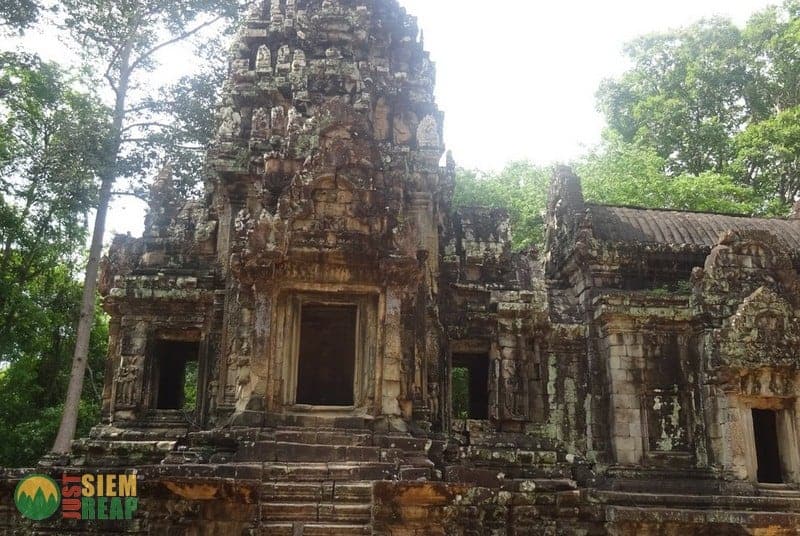 Thommanon is located just outside of Angkor Thom‘s eastern Victory Gate. It’s just a few minutes off Victory Way just before you reach the Siem Reap river. It sits directly north of Chau Say Tevoda temple and is only around 100m away from the ancient bridge called Spean Thma.

If you’re coming from Angkor Thom, then exit the ancient city from the Victory Gate. Take the second left and you’ll see the temple directly in front of you. If you’re coming from Ta Prohm, then head towards Ta Keo temple. Follow the road around to the right and then left over the Siem Reap river. After about 30 or 40m turn right and Thommanon is directly in front of you.

Thommanon is often overlooked on tours, but it is featured on some Small Angkor Circuit Tours. If you’re taking a private tour of the “Big Three” temples (Angkor Wat, Bayon, and Ta Prohm), then you can ask your guide or driver to stop along the way to Ta Prohm after you’ve been to Bayon temple.

As there are no hotels in the Angkor Archaeological Park, most visits will find accommodation in Siem Reap town. There are many hotels of all shapes, sizes and prices. You’ll easily find something to suit both your budget and taste.

Thommanon is not as busy as some of the other more popular temples in the area, but it is one which you should make the time to visit. It contains some of the best preserved carvings of devatas anywhere in the Angkor Park.

There is some discussion on exactly when Thommanon was constructed. The most widely agreed date is that it was built by King Suryavarman II around the same time as Angkor Wat in the 12th century.

However, some people believe that it was built earlier in the 11th century. The carvings of the celestial females (devatas) are similar to those built during the reign of king Jayavarman VI in the late 11th century.

It’s believed that Thommanon was deserted like the other temples in the region at some point in the 16th century.

The EFEO – École française d’Extrême-Orient – funded an extensive restoration program in the 1960s. The whole temple was fully restored to an extent that it is in much better condition than neighbouring Chau Say Tevoda, even though it was built much earlier.

In 1992, Thommanon was inscribed as a UNESCO World Heritage site.

Thommanon has a single tower which faces to the east. There is an entrance building (gopura) on the east side and smaller chamber before you reach the central sanctuary tower.

The walls making up the outer enclosure have all disappeared and there is only the entry gates on the east and west still standing. The central sanctuary tower is the only part of the main temple which is still there.

The carvings of the divine celestial females or devatas are the most striking thing about this temple. The devatas all include crowns, skirts, armbands, ankle bands, and necklaces.

The way that the devatas hold their flowers is also very distinctive. The flowers are held with the thumb, ring finger and middle finger. The other two fingers are extended out. This style is also featured in Angkor Wat temple.