Bat Chum is a small temple located a few kilometres away from Angkor Wat. It was built in the 10th century by a minister to the King. Surprisingly, it was built as a Buddhist temple when Hinduism was still the dominant religion at the time.

The temple is rarely visited by tourists as it’s a little off the beaten track. However, it is a nice place to visit, especially late in the afternoon. 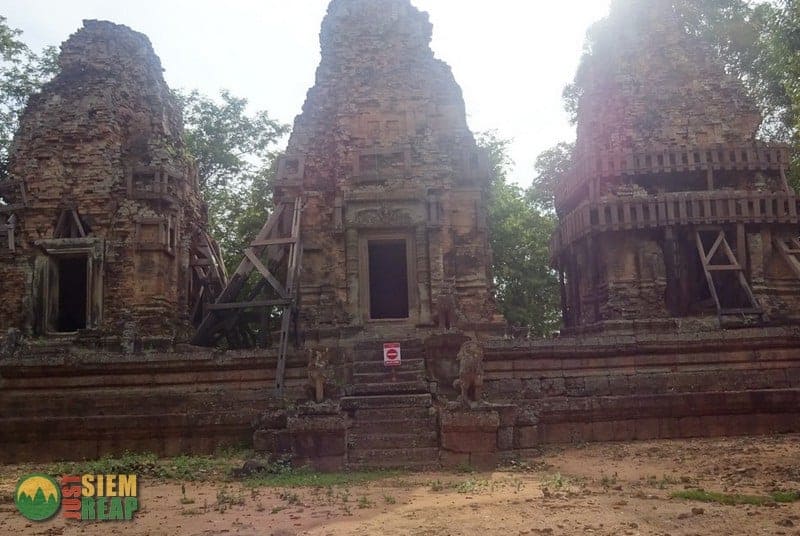 If you’re coming from Ta Prohm, then go past Banteay Kdei temple and turn right just before you get to Srah Srang.

The location isn’t too far from Siem Reap town so there are plenty of option to get there including tuk tuk, taxi, or bicycle.

You won’t only come to see Bat Chum by itself. Instead, you’re likely to combine it as part of a bigger tour. Most popular tours which may include Bat Chum temple include the Small Circuit Angkor Wat Tour and the Grand Circuit Angkor Tour.

You might also want to stop by on the way back from Banteay Samre or Banteay Srei.

Bat Chum is located inside the Angkor Archaeological Park. There are no places to stay near to this temple. Most visitors will stay at a hotel in Siem Reap and travel to visit Bat Chum Temple.

Very few people come to Bat Chum and you can have the opportunity to visit in relative peace and quiet. The temple isn’t big enough to spend a long time here, but it could break up a journey when you’re on the way to other temples.

The area is surrounded with rice fields and you may even see monkeys relaxing and playing around.

The light is very nice towards the end of the afternoon. Early in the morning is another pleasant time to visit where you can get some great photos. You don’t have to worry too much about other visitors when taking photos here.

Bat Chum was built in the mid-10th century by Kavindrarimathana, a Buddhist minister for King Rajendravarman. Unusually, it this was a Buddhist temple at a time when Cambodia was predominantly Hindu.

In the 20th century, the site was excavated and the connection to Buddhism was found.

Other than this, not much is known about Bat Chum.

There are three brick towers situated in a line. Currently they are in poor condition. They all sit on a platform which is surrounded by a moat and an enclosure. There is a single entrance building (gopura) to the east.

When it was first built, there would have been houses and a Buddhist monastery nearby. These structures are mostly likely to have been made by wood and have long since perished.

There are inscriptions in all the towers. They warn elephant handlers to keep their elephants off the dykes.