Preah Pithu Group is a collection of five temples located opposite the Terrace of the Leper King inside the ancient city of Angkor Thom. Although today they form part of a group, it’s likely that they were built individually. The temples have only recently been cleared and open to the public.

Most of them are in poor state and from a distance they look like uninteresting ruins. However, they are worth a visit because the carvings are some of the finest found in the Angkor Archaeological Park.

There are five temples which are identified by the letters – T, U, V, X and Y. The first four (T, U, V and X) are all Hindu temples and “Y” is a Buddhist temple. It’s likely that this was the last one to have been built. “Y” was also unfinished. 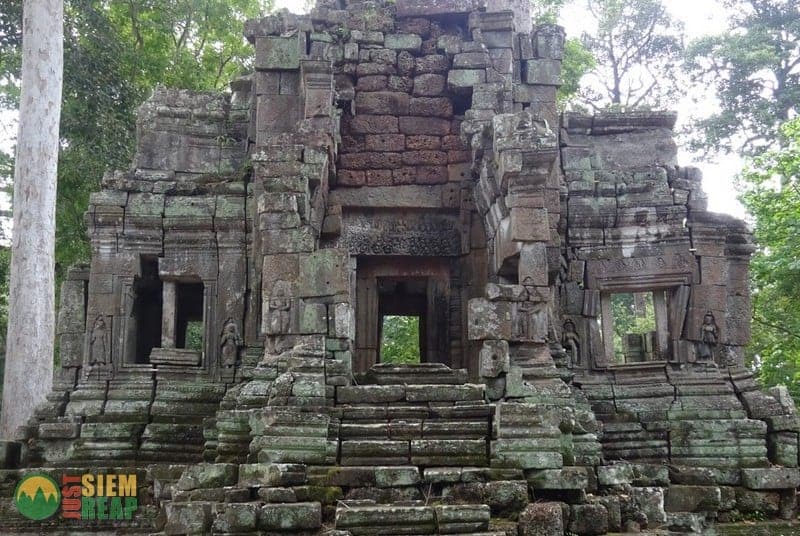 Prasat Preah Pithu is located inside Angkor Thom opposite Tep Pranam and the Terrace of the Leper King. Although nearby these temples, it’s likely that the temples at Preah Pithu were built at different times. The area is surrounded by trees and is a peaceful place to visit.

Preah Pithu isn’t often included on tours of Angkor, but you will likely pass it on many tours. Popular tours of the area include the small circuit, grand circuit, sunrise tour and the sunset tours.

You can ask your guide or driver to stop here when you’ve finished at the Terrace of the Leper King.

If you are part of a shared or group tour, it’s unlikely that your tour will visit this group of temples unless it’s specifically mentioned on the itinerary.

There is no accommodation available inside the Angkor Archaeological Park. Many guests therefore stay in Siem Reap which has grown to be a large tourist hub serving the needs of visitors to Angkor.

Here you will find hundreds of hotels which are suitable for all tastes and budgets. There are often some great deals to be had all year round.

The whole area is very pleasant to wander around. You can walk from the terraces to the small shops and restaurants opposite. As you walk behind this area, you’ll find a small enclosed area surrounded by trees. Here you will find the five temples of Preah Pithu.

Preah Pithu does get quite a lot of visitors, but nothing compared to the more popular temples in the area. The beautiful carvings, the hidden stones, and the surrounding forest make for a very pleasant experience.

Not much is known about the Preah Pithu group. It’s thought that they were built during the 12th and 13th centuries during the reign of kings Suryavarman II and Jayavarman VIII. Temples T, U, V and Y are Hindu temples and likely to have been built before X which is a Buddhist temple.

Preah Pithu X may have even been built as late as the 14th century. What is known is that they were not all built during the same period.

It’s thought that Preah Pithu was abandoned in the 16th century along with the other temples in the area.

The temples were cleared in the early 20th century. The area was cleared again and made safe for visitors in the late 20th century.

All five temples are in bad condition with most of the upper levels completely destroyed. However, there are many carvings which can still be seen and they were some of the finest examples of Khmer art.

These temples were definitely built at the same time. They are on the same east-west axis and share a single moat. Both are oriented to the west, which is unusual for Khmer temples.

Temple “T” is a 40 x 45m sandstone enclosure with two entrance buildings (gopuras). There is a sanctuary tower which is around 6m high. The lintel on the door shows a carving of the “Churning of the Sea of Milk” and the walls have been decorated in the Bayon style.

Temple “U” is a little smaller at 35 x 28m but it is very similar in design to “T” but without the entrance buildings. The carvings on the lintels show Shiva dancing between Vishnu and Brahma. There is another carving of the “Churning of the Sea of Milk” on the northern lintel.

Temple “V” doesn’t have an enclosure. On the west side of the temple there is a causeway and a long terrace. The sanctuary tower sits on a two-tiered platform. Here you can see decorations in the Angkor Wat style.

Preah Pithu X is the Buddhist temple. It’s similar in design to the other temples, but the carvings are incomplete. Inside the sanctuary tower, you will see carvings of Buddha and Buddhist motifs.

Temple “Y” differs in that it doesn’t sit on a platform and is directly on the ground. It is the only one to face east. The chamber has mostly collapsed but the two main carvings show Hindu gods Krishna and Vamana.