Ta Prohm is up there with Angkor Wat and Bayon temple as one of the most visited temples in the Angkor Park. There are many reasons for it’s popularity, but the biggest reason is probably that is was used as the backdrop for the filming of the Lara Croft Movie – Tomb Raider.

The jungle is literally growing through the middle of the temple which also adds intrigue and wonder to this amazing site. Ta Prohm is on most people’s “bucket list” of temples in Siem Reap, so make sure that you don’t miss it.

It gets very crowded here, so keep reading our helpful Ta Prohm Temple Guide to know exactly when to come to avoid the large crowds. 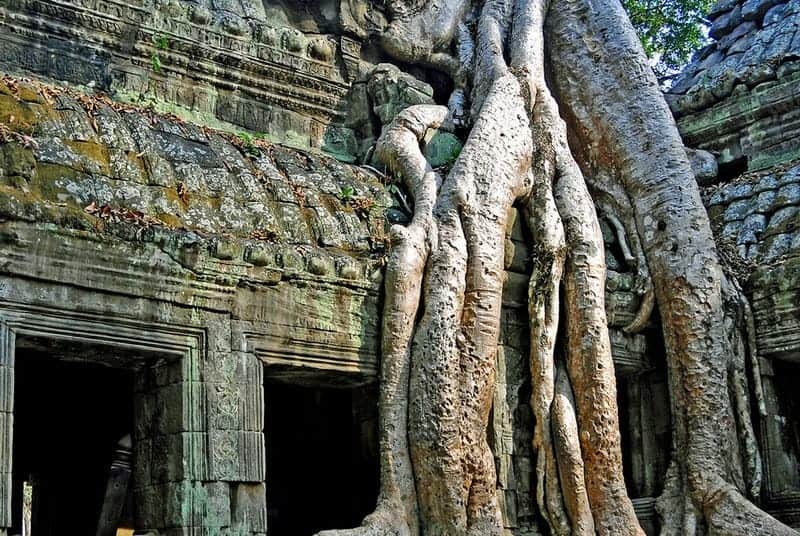 Ta Prohm is located in the heart of the Angkor Park just to the east of Angkor Thom. It’s along the main road which the Angkor Small Circuit Tour follows. Nearby temples include Ta Keo, Banteay Kdei, Kutisvara, Chau Say Tevoda and Thommanon.

If you’re visiting Ta Prohm temple from Angkor Thom, then head east out of the ancient city via the Victory Gate along Victory Way. Continue past a small group of temples including Thommanon and Chau Say Tevoda and over the Siem Reap River.

Follow the road round to the right and then left. You will go past Ta Keo on the left side. Continue to the junction and turn right. Follow the road around 1km south before bending around to the left. Continue for another half a kilometre and take a left turn. Turn left again and you’ll see Ta Prohm directly ahead of you.

If you’re heading directly to Ta Prohm from Siem Reap, enter the park via Apsara Road. Then turn right towards Prasat Kravan, Srah Srang and Banteay Kdei. As you see the large pool of water on the right right side, take a left at the junction. Head along the road for around 400m and then turn right. Turn left at the end of the road and you’ll see Ta Prohm ahead.

Ta Prohm is featured on most tours of the temples. Being one of the “big three” it is listed on most one-day travel itineraries. Tours such as the Angkor Wat Sunrise Tour, Small Circuit Angkor Tour, Angkor Sunset Tour are very popular options.

Most tourists will only spend an hour or so at Ta Prohm and therefore would usually combine it with visits to Angkor Thom, Bayon, Angkor Wat and other popular temples in the area.

You’ll find many hotels in Siem Reap with the name “Ta Prohm” but none are near the famous temple! Hotels and modern structures are not allowed inside the Angkor Park and you won’t be able to stay near Ta Prohm temple.

There are many hotels to suit all tastes and budgets in Siem Reap town. Most visitors to the temples will stay in town and use various forms of transport to get around the temples.

As it’s one of the most popular temples in Siem Reap, it does get very busy. If you want to get some photos or escape the crowds then it’s best to visit very early in the morning or very late in the afternoon.

Many guests like to recreate photos depicting famous scenes from the Tomb Raider movie. Guests also like to try to find the stegosaurus carving by themselves as a sort of “treasure hunt”. If you can’t find it, you can always ask your guide to help you!

The original name for Ta Prohm was Rajavihara which means Monastery of the King in English. It was built in 1186AD by King Jayavarman VII and was one of the first temples built during Jayavarman VII’s prolific reign.

The temple was built in honour of Jayavarman’s family. Inscriptions tell us that main part of the temple represents Prajnaparamita which is the perfection of wisdom and relates to the king’s mother. The northern satellite temple in the third enclosure was dedicated to Jayamangalartha, the king’s guru. The southern satellite temple was dedicated to Jayavarman’s brother.

Ta Prohm was originally built as a Buddhist monastery and university. It was home to 12,500 people, including nearly 20 high priests and over 600 dancers. The surrounding villages were home to 80,000 people who provided services and supplies for the people living in Ta Prohm.

After King Jayavarman VII, Ta Prohm continued to be an important part of the Khmer empire. As such, it was continually expanded under subsequent kings. These additions continued well into the 15th century under King Srindravarman.

Like other temples in the area, Ta Prohm was deserted at some point in the 16th century. It was left to the jungle to take over. Today, trees and vegetation are seen growing through the structure.

As the structure at Ta Prohm was completely enveloped by the jungle, it was decided that it was nearly impossible to restore it to its former glory. Moreover, the trees and vegetation added to the beauty of the temple. In fact, Maurice Glaize, an Angkor scholar, stated that it’s one of the most imposing temples which had joined with the jungle without the jungle fully taking over.

Although it hasn’t been restored, a lot of work has been done to ensure that Ta Prohm temple is safe for visitors.

In 2013, the Archaeological Survey of India restored parts of the temple. They also constructed platforms, roped railings and wooden walkways to stop tourists from damaging the temple even further.

Ta Prohm is known as the “Tomb Raider” temple. In 2000, the Lara Croft movie was filmed at various locations in the Angkor Park including Phnom Bakheng, Bayon and Ta Prohm. Most of the filming was centred around Ta Prohm and the name stuck.

It’s sometimes claimed that Indiana Jones was filmed in Cambodia and at Ta Prohm. However, these claims are false and no filming took place in Cambodia. In fact, the Temple of Doom was filmed in 1983 and due to the collapse of the Khmer Rouge in 1979 and raging civil war in the following years, much of the country would have been inaccessible or too dangerous for a Hollywood film to be made here.

There is a famous “stegosaurus” carving at Ta Prohm. Depending on who you listen to, the carving is proof that the ancient Khmer had knowledge of dinosaurs or even had seen them during their time. On the other hand, some experts believe that the carving is just a boar or rhino standing in front of a leafy background. Whatever the truth, it’s a good way to add mystery to Ta Prohm and help to maintain its status as one of the “big three” temples in Siem Reap.

Ta Prohm is one of the largest temples built during the Khmer empire. The outside enclosing wall measures 1000m by 600m and was made from laterite. Only small sections of the wall are still visible today.

There were four entrance buildings (gopuras), one on each side of the outer wall. However, only two are accessible. In fact, most guests will enter from one side and walk through to the other side to be met by their driver. There are “face towers” like the ones you see at Bayon on each gopura. It’s thought that these were added in the 13th century.

There would have been a moat inside and another one outside the outer wall. The presence of two moats suggest that the outer enclosure was expanded after the original construction.

There are three inner enclosures which feature galleries, a library, satellite temples, a house of fire and a hall of dancers. It’s difficult for visitors to get their bearings of the inner enclosure as various parts of the temple are inaccessible and tourists have to enter on different sides of each enclosure.

It is in the inner enclosures where you’ll see the trees growing through the structure. The main “Tomb Raider Tree” can be seen in the central sanctuary.