Chau Say Tevoda translates into English as the “prolific grandchildren of a deity”. It’s located just outside Angkor Thom near the Victory Gate.

The temple was built as a Hindu temple and dedicated to Shiva and Vishnu.

Today, the temple has been restored and is open to the public. Some visitors come here, but most will bypass it in favour of the more popular temples on the tourist trail. 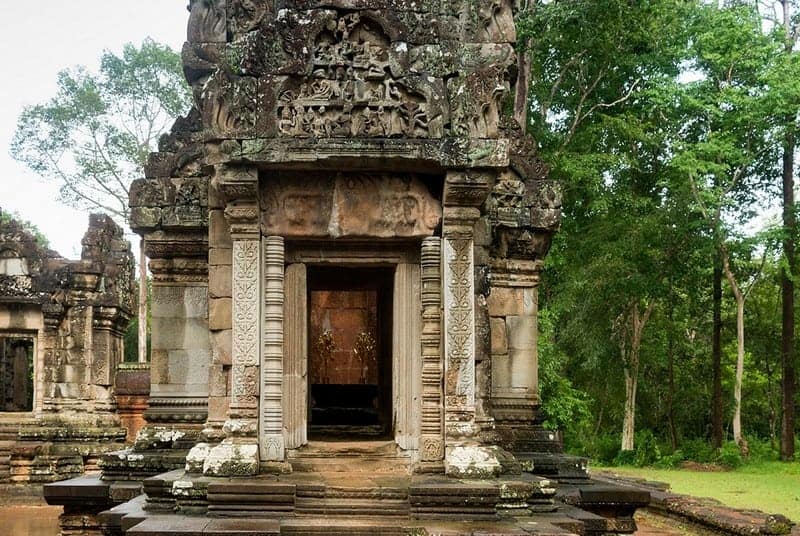 Chau Say Tevoda is located a few hundred metres east of the Victory Gate at Angkor Thom. It’s less than 200m directly south of Thommanon temple. Other nearby temples include Ta Keo and Chapel of the Hospital.

You can reach Chau Say Tevoda from Angkor Thom by exiting through the Victory Gate along Victory Way. Alternatively, you can head east from Angkor Wat to Srah Srang. From here, turn left and then turn right after Ta Prohm temple. Follow the road to the left and go across the Siem Reap River. You’ll see the temple on the left side.

You can easily reach this temple by all modes of transport. It’s not too far from the town, so it’s easily accessible by bicycle, tuk tuk and taxi. You may also see some larger buses and minivans here for tour groups.

Chau Say Tevoda isn’t often visited by tourists. However, it can easily be added to tours which include Angkor Thom and other popular temples nearby, such as Ta Prohm temple.

If you’re on the Angkor Wat Small Circuit Tour, then ask your guide to stop along the way. If you’re on a shared tour or in a group, then you may not get the opportunity to visit this temple unless it’s explicitly mentioned in the itinerary.

As the temple is located in the Angkor Archaeological Park, there is no accommodation nearby. Most guests will tend to stay in Siem Reap town and travel the short journey to the park to see the temples. There are hundred of accommodation choices in town to suit nearly every taste and budget.

The temple was once is a poor state with nearly 4,000 parts of it laying around in the area. However, the Chinese embarked on a 9-year restoration project and it’s now a great place to visit.

Many visitors overlook this temple in favour of the other more popular temples like Bayon or Ta Prohm. This means that you can explore in relative peace and quiet.

You can get some great shots of this Angkor Wat style temple without thousands of tourists blocking your view.

Chau Say Tevoda was first built in the 12th century by Suryavarman II. It was later added to by both Yasovarman II and Jayavarman VII.

It was originally built as a Hindu temple and was dedicated to both Shiva and Vishnu. Later kings added Buddhist images to the temple.

Like most of the temples in the area, it would have been abandoned at some point in the 16th century.

Chau Say Tevoda was rediscovered by French explorers in the late 19th century.

Chau Say Tevoda has four gopuras – one on each of the cardinal points. Like most temples, the main entrance is from the east.

The temple has a raised causeway which leads to the river.

There is a long hall which links the gopuras and a chamber in the middle. The central tower has two libraries on the north and south sides. This in enclosed by a wall with four more towers.

Many of the Hindu sculptures are still in very good condition. However, most sculptures of Buddha are nearly unrecognisable.

There is also a bas relief of Sita flanked by female demons. Hanuman can also be seen offering Ram’s ring to Sita.