Preah Ko is one of the four temples which make up the Roluos Group, the other three being Bakong, Lolei and Prasat Prei Monti. It’s one of the oldest temples built during the Khmer empire and predates Angkor Wat by a few hundred years.

It was built in what was then the capital city (Hariharalaya) before it was moved to Angkor Thom. Nowadays, many people make the 15km or so journey out to Preah Ko to see this temple and the others in the area.

If you have the time to visit, it’s well worth taking the time to explore the temples of the Roluos Group. 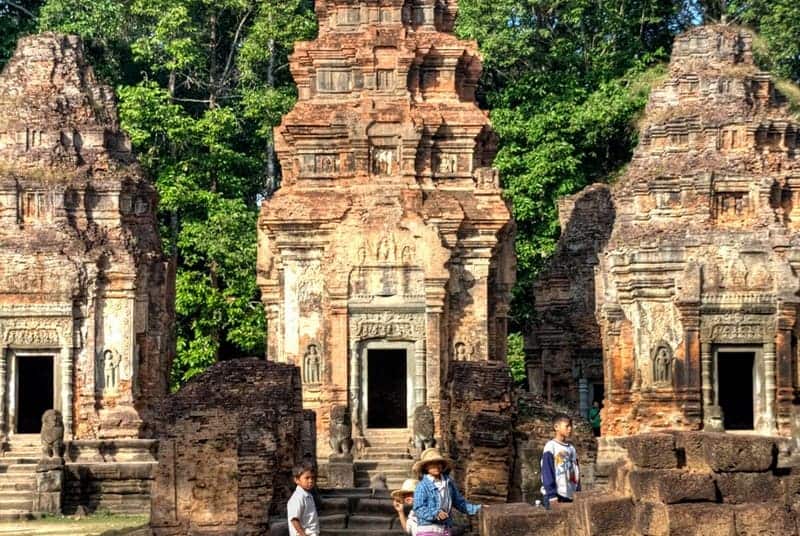 Preah Ko is located in Roluos which is around 15km from Siem Reap. It’s located next to Bakong temple and south of Lolei temple.

Getting to Preah Ko is easy. The National Road 6 is a good road and it’s easy to take a tuk tuk or a taxi to get there. However, National Road 6 is the main road to Phnom Penh and it’s busy, so if you’re cycling, you may want to opt for a more scenic route through the countryside.

If you’re taking the National Road 6 option, you can head out of Siem Reap for around 15km. Then turn right before you get to the Bakong High School. Continue along the road for around 400 or 500m and you’ll see Preah Ko on the right side.

If you decide to take the back way, you’ll want to leave Siem Reap via the Sala Kamreuk road towards Chhreav Village. Keep following the road to the east and eventually, you’ll find the group of temples which make up the Roluos group.

Preah Ko and the Roluos Group are popular temples to visit. They aren’t as visited as the main temples near Angkor Wat, but they still attract hundreds of visitors each day. Cycling Tours are a popular option for these temples as you can take the back way through the countryside.

If you’re travelling by tuk tuk or taxi, then you’ll probably have finished exploring the temples in half a day or less. Many tourists opt to include a floating village tour of nearby Kampong Phluk when visiting the Roluos Group.

It’s also possible to stop and see Preah Ko on the way back when taking a Beng Mealea temple tour.

There’s more to offer visitors in Siem Reap than there is in Bakong. But if you want to get away from the hustle and bustle of Siem Reap, you might want to opt to stay in a home stay or small local guest house in the area.

All the temples in this area are historically significant and well preserved. As such, they do attract quite a lot of visitors. However, they aren’t as busy as the main temples in the park and it will feel a lot less crowded here.

If you’re into cycling, the temples in the Roluos Group can be a great destination to get out of the town, explore the countryside and see a few temples.

Preah Ko was built by King Indravarman I in 879. Indravarman was the nephew of Jayavarman II, the founder of the Khmer empire. The temple was dedicated to Shiva and the name “Sacred Bull” represents Nandi, Shiva’s mount. Preah Ko was the oldest of all the temples in Roluos.

At the time, Preah Ko would have been part of the ancient capital city of Hariharalaya before it was moved to Angkor Thom in the late 12th century.

The temples would have declined in importance at this time, but would have continued to have been used.

It’s believed that the temples were deserted with the other temples at Angkor at some point in the 16th century.

The site was rediscovered by French explorers in the late 19th century. It wasn’t until the 1930s that the site was cleared. In the 1990s, the German government funded a restoration project of the towers.

There are 6 main towers at Preah Ko, all of which have been wonderfully preserved and there are many carvings and inscriptions to see.

Although now dry, the site would have originally been surrounded by a moat which measured 500m on all sides. Inside the grounds, there were three enclosures. There is nothing left of the third enclosure except for the east entrance building (gopura) which would have been the main entrance to the temple.

The second enclosure is home to a library. There would have been gallery buildings too, but these no longer exist.

The first enclosure features a gopura entrance at the centre of both the east and west walls. The lintels over these entrances feature carvings of Hindu gods such as Vishnu. The stele in this enclosure is dedicated to Shiva and the names of the ancestors of King Indravarman I. It also mentions the dates in which the statues were installed in the towers.

There are six towers which stand in two rows of three on a sandstone platform. As usual with Khmer architecture, all of the towers face east with the middle tower being the tallest. In front of the platform facing each of the three towers, there are three statues of Shiva’s mount – Nandi. This is where the name ​​”Sacred Bull” would have came from.

Each of the towers contain very detailed carvings which are still visible today. There is a door opening to the east with fake doors on the other three sides.