On this tour, we’ll start the morning at Phnom Kulen. We’ll start with the waterfalls before it gets too busy. We’ll then head to explore the River of a Thousand Lingas and the large reclining Buddha at Wat Preah Ang Thom. On the way back to Siem Reap we’ll stop by the Landmine Museum and Wat Thmey to learn about the killing fields in Siem Reap. 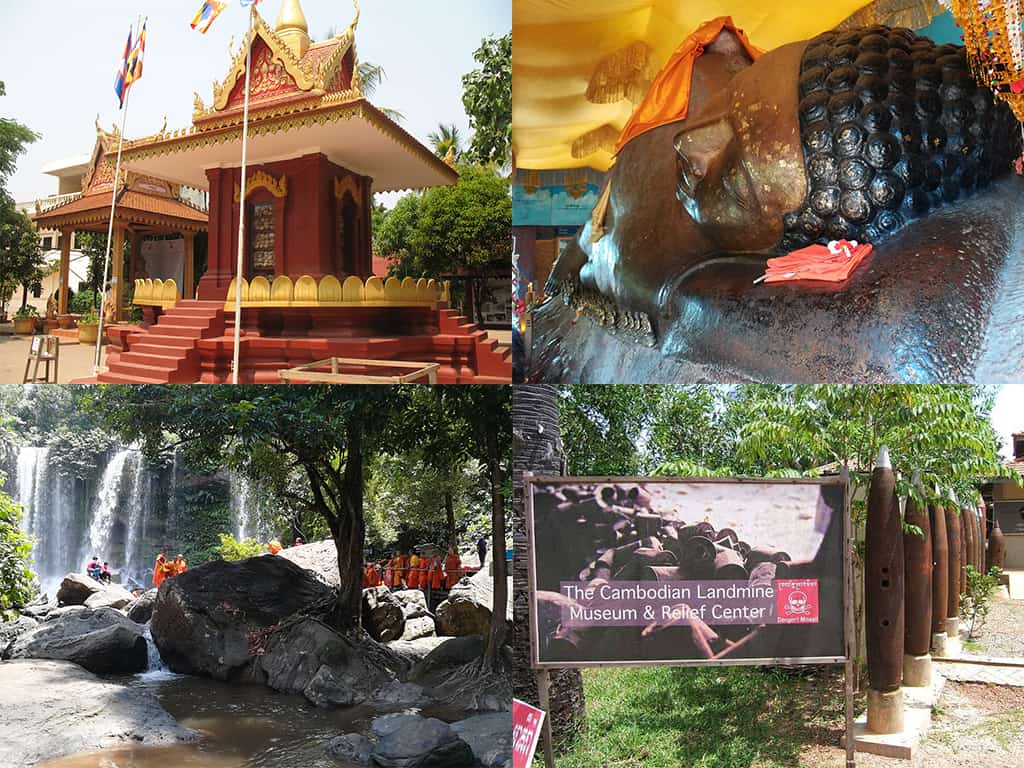 The tour will start after breakfast around 8 o’clock in the morning. We’ll start the 2 hour drive out to Phnom Kulen. Along the way, you’ll get to see some beautiful countryside and take in the stunning views as we enter the Phnom Kulen National Park. The mountain range is one of the most beautiful places in Siem Reap province.

After we reach Phnom Kulen, we’ll start with the waterfalls to avoid the crowds which gather here later in the day. You’ll often see many people swimming in the river and near the waterfalls and locals believe that swimming here will give you good luck. Kulen mountain is one of the most sacred places in Cambodia.

We’ll see two waterfalls. Both of these waterfalls are popular with visitors because of their beautiful surroundings. They are completely surrounded by lush rainforest and are very picturesque. The first waterfall is the widest and measures 25m in width and is around 5m tall. The second waterfall is much taller at 15m but only around 15m wide. Both waterfalls vary in size depending on whether you’re visiting during the dry or wet season. During the wet season the waterfalls are largest, but they are still worth visiting during the dry season.

We’ll stop for some lunch in one of the local restaurants in the area.

After lunch, we’ll head over to the River of a Thousand Lingas. Here, you will see where the ancient Khmer carved lingams into the riverbed. A linga is the phallic symbol of the the Hindu god, Shiva. Moreover, you’ll also see carvings of animals and the other Hindu gods such as Vishnu.

We’ll walk along the river and your guide will explain the history and the meaning of the various carvings.

We’ll then to go see Wat Preah Ang Thom where you’ll get to see the largest reclining Buddha statue in Cambodia. This 16th century statue was carved out of sandstone and it’s a popular place to visit for both locals and tourists.

Along the way back to Siem Reap, we’ll stop at the Cambodian Landmine Museum. Here, you will learn the story of Aki Ra and his team who go around Siem Reap disarming landmines. There are still millions of landmines in the ground and they continue to affect Cambodians and their communities.

The landmine museum works hard to educate visitors about the impact of landmines. They also educate communities about what to do when they find explosives. Guests are invited to see the different types of explosives found in Cambodia and learn about the tragic history of Cambodia’s past.

When we arrive back to Siem Reap, we’ll stop at Wat Thmey (Siem Reap’s Killing Fields). The pagoda was used by the Khmer Rouge as a prison and kept hundreds of people here during their time in prison. The prisoners were tortured to confess to their crimes and then killed. Their bodies were buried in two pits and wells just a few hundred meters from the pagoda. Many innocent Cambodians were killed at Wat Thmey during the brutal Khmer Rouge regime in the 1970s.

When we’ve finished at Wat Thmey, we’ll drop you back to your hotel or any other destination in Siem Reap.

This tour is great for people who want to go and see Phnom Kulen as well as learn about some of the tragic history of Cambodia. If you’ve already seen the temples at Angkor Wat and want to get out of the town, then this Phnom Kulen Tour is a great option.

Each person will need an entrance ticket for Phnom Kulen. The cost of the ticket is $20 per person. This can be bought in Siem Reap or at the entrance of the Phnom Kulen National Park.

You will also need to pay for your entrance to the Landmine Museum which is $5 per person.

Entrance to Wat Thmey Killing Fields is free but you can make a donation to the upkeep of the pagoda.

This tour of Phnom Kulen, the Landmine Museum and Wat Thmey is popular with guests who have already seen the temples in Siem Reap. It’s common for guests to see Angkor Wat on their first day and then take this Phnom Kulen tour as part of a package. Popular tours of Angkor Wat include:

Other Phnom Kulen tours include: