In the morning, you’ll go to Kulen Mountain where you’ll see the waterfalls, the River of a Thousand Lingas and the largest reclining Buddha statue in Cambodia. After lunch, we’ll then head over to Beng Mealea to explore the unrestored jungle temple. 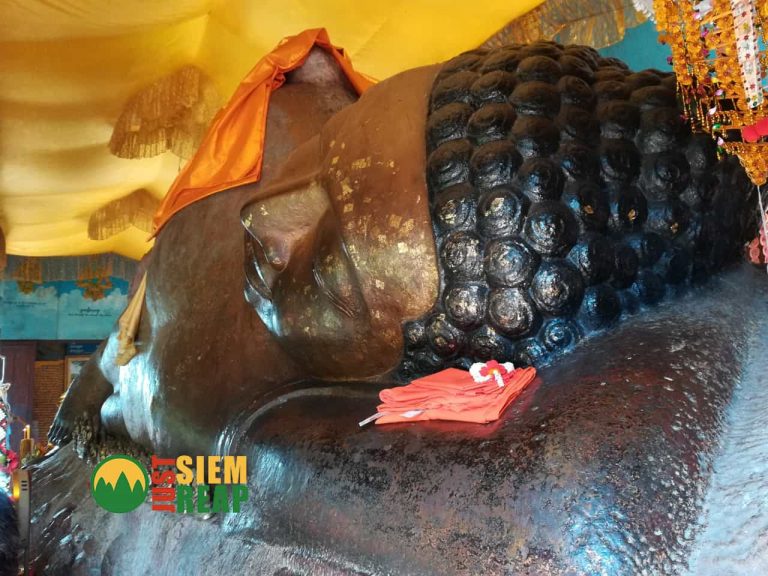 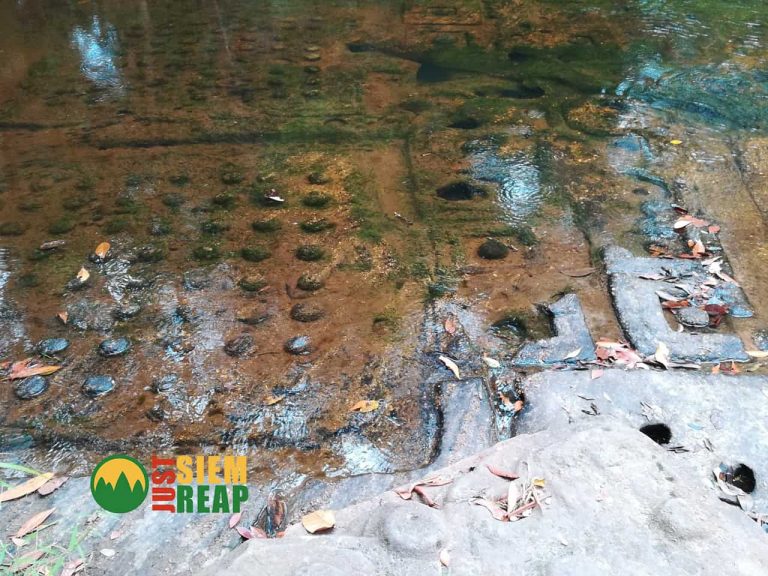 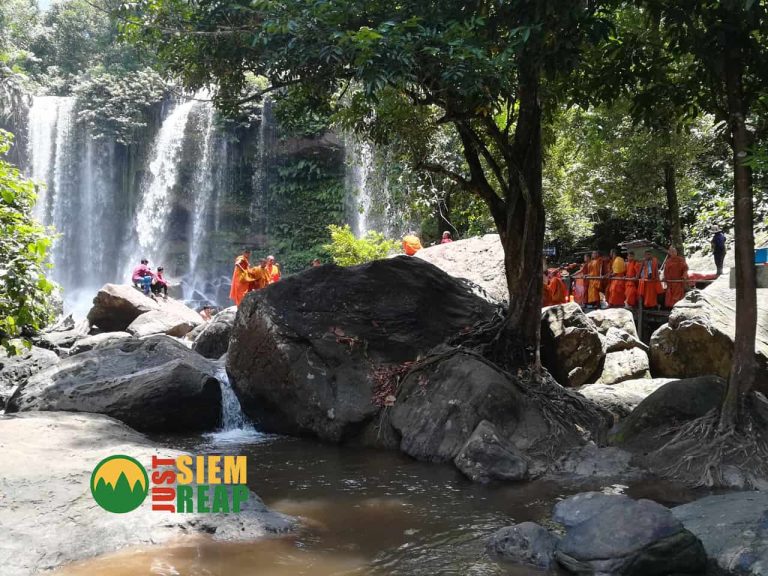 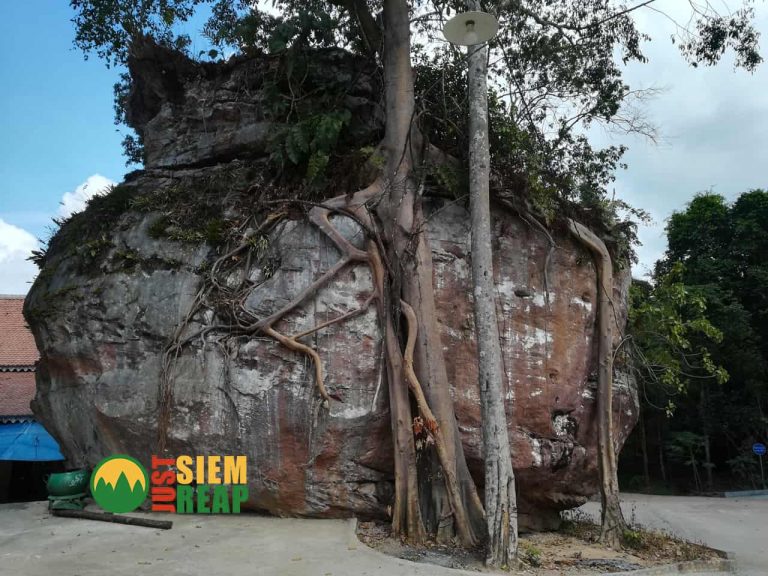 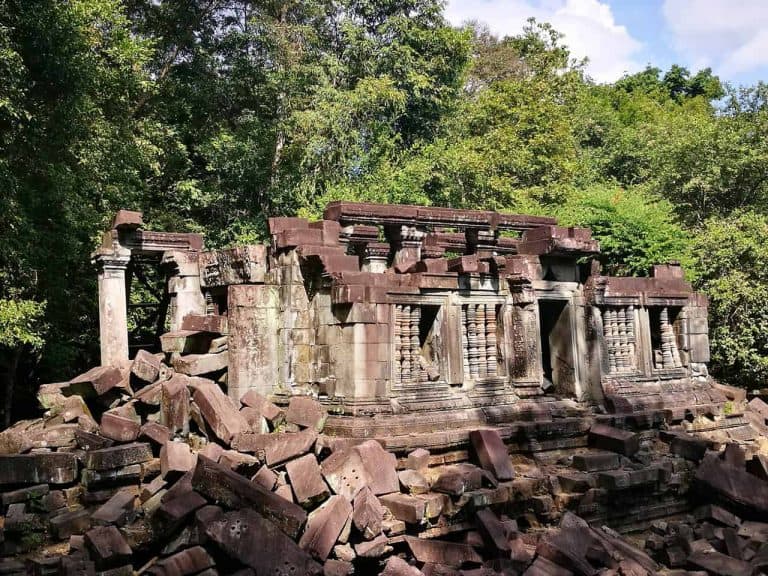 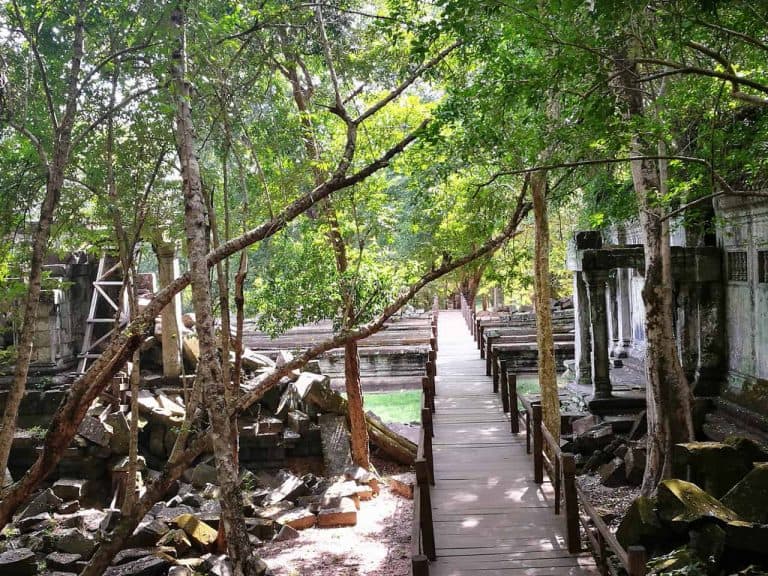 This tour starts after breakfast around 8 o’clock. The drive out to Phnom Kulen takes around 2 hours and we’ll stop along the way to arrange your tickets. As we drive out to the Phnom Kulen National Park, you’ll see some of the most beautiful views of the countryside in Siem Reap. The Kulen mountain range is a wonderful sight and will take your breath away.

We’ll start the tour with the waterfalls so that we can avoid the large crowds which gather a little later in the day. The river and the pools around the waterfalls are often full with swimmers. It’s believed that swimming here will bring good luck. The water here is considered to be holy as this spiritual place is one of the most sacred sites in Cambodia.

There are two waterfalls which we’ll see on this tour. The first one is around 25m wide and 5m tall. The second one isn’t so wide at only 15m but it’s nearly three times taller, also at 15m. The exact sizes of the waterfalls vary in size depending on the time of year you visit. The views of the waterfalls completely surrounded by thick jungle are like nothing else you’ll see during your trip to Cambodia.

The tour will continue with a visit to the River of a Thousand Lingas. You’ll get to see the ancient carvings in the riverbed. These lingas are the phallic symbol of the Hindu God, Shiva. There are also carvings of the other Hindu gods and some animals.

You can walk along the river as your guide explains the meaning of the carvings and the history of the site.

Next, we’ll go to Wat Preah Ang Thom where you will see the largest reclining Buddha in Cambodia. This 16th century statue was carved out of a solid piece of sandstone.

Beng Mealea temple is known as the “unrestored jungle temple” and it is the perfect complement to Phnom Kulen. Beng Mealea has been left unrestored and it’s completely surrounded by thick jungle. The unique appearance of the temple means that it is gaining popularity with tourists. However, the temple isn’t crowded and you can explore in relative peace and quiet.

Historians believe that Beng Mealea was built around the same time as Angkor Wat. The style of the two temples are very similar and the Apsara carvings are almost exactly the same. Just like Angkor Wat, Beng Mealea was also dedicated to Vishnu when many of the temples from this period would have been dedicated to Shiva.

When you’ve finished exploring Beng Mealea, we’ll make the 60km journey back to Siem Reap where you’ll be dropped off at your hotel.

This tour is popular with guests who have already seen Angkor Wat and want to get out of the town and into the countryside. You’ll get to see the beautiful views from Kulen Mountain and explore Beng Mealea which is surrounded by thick jungles.

You will also need a ticket for Phnom Kulen which is $20 per person.

Other popular Beng Mealea tours include:

Other Phnom Kulen Tours include:

If you’re looking to combine this tour with another tour, then you might want to consider a tour of Angkor Wat for the first day.