In the morning, we’ll leave take the 60km or so drive out to Beng Mealea. Here, you’ll spend the morning exploring the ruins of the “unrestored temple”. After lunch, we’ll then drive to Kampong Khleang, one of the four floating villages on the Tonle Sap Lake. 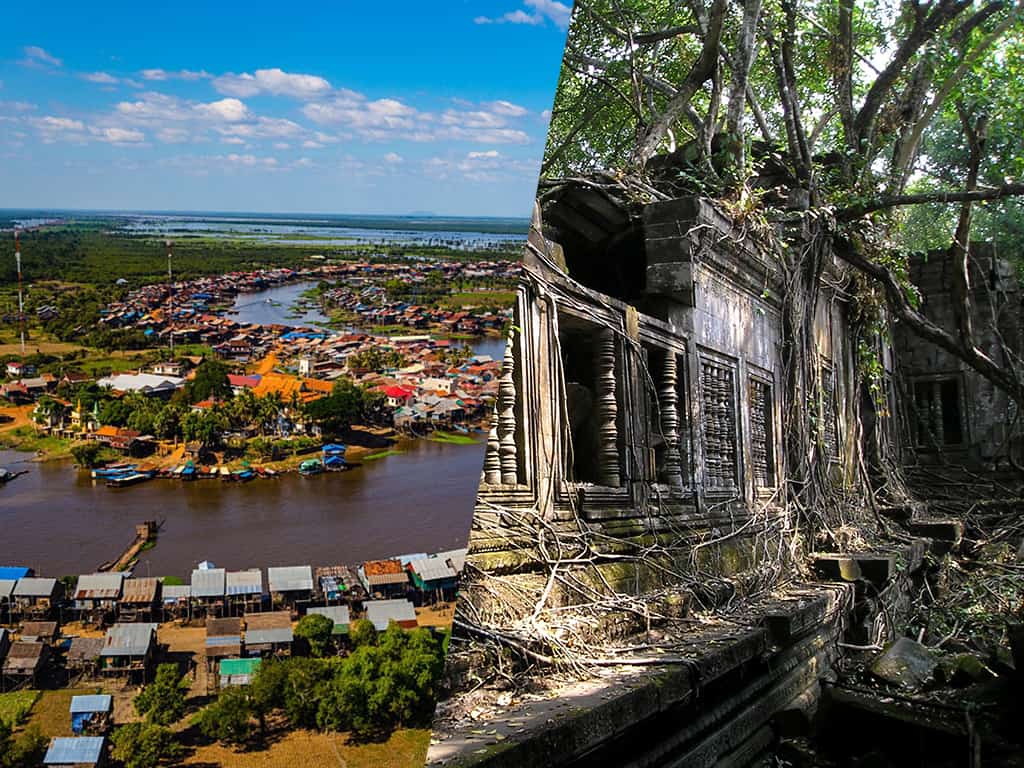 We’ll start the tour around 8:00 o’clock in the morning after you’ve had breakfast. We’ll have a quick introduction and then start the drive 60km drive out to Beng Mealea temple. This temple isn’t as popular as the temples at Angkor, but it’s definitely worth the visit. It’s known as the real jungle temple because the jungle has, quite literally, taken over. There are trees and vines growing throughout the structure of Beng Mealea.

The temple also has a fascinating history as it was built in the style of Angkor Wat and dedicated to Vishnu. It’s believed that it was built around the same time as great temple at Angkor as it features similar carvings of apsaras on the walls.

Your guide will take you through the ruins and explain the history of the temple to you. Moreover, you’ll get to explore the grounds around the temple and keep cool under the cover of the trees.

When we’ve finished exploring the temple, we’ll stop for lunch at a nearby local restaurant. You can also take the opportunity to buy a few gifts.

You’ll get to see how the local villagers have adapted their way of life to fit their surroundings. The whole village is on top of the water including homes, schools, clinics, and shops. You can also explore the area around the floating villages and take in the wonderful view.

When we’ve finished with Kampong Khleang, we’ll make the journey back to Siem Reap town where we will drop you back to your hotel or at any other location in Siem Reap town.

If you’re looking to get out of Siem Reap town and get a little of the beaten track, then this is definitely the tour for you. Most people who book this tour will have a few days in Siem Reap and combine it with a trip to Angkor Wat. It’s common to do one of the popular Angkor Tours on the first day and then see Beng Mealea on the second day.

The tour includes the cost to enter the floating village and the cost of the boat ride.

It’s common for guests to combine this tour in a two or three day package. If you’re looking to explore the temples at Angkor Wat on the first day, then you might want to consider combining this tour with one of our most popular tours: