The full name for the gardens is the Royal Crusade for Independence Gardens. This is a bit of a mouthful and it’s often shortened to the Royal Gardens. You’ll also find the Royal Residence just opposite, but this isn’t open to tourists.

It was here that King Sihanouk and General Lon Nol plotted Cambodia’s independence from their French colonial overlords in the 1950s. At the other end of the gardens, the King and Lon Nol would look out to see the largest colonial-style hotel built during the French occupation (Raffles Grand d’Angkor Hotel) while they sat in their French-made residence – maybe they used this as their inspiration!

Nowadays, the park has become a very popular spot for both locals and tourists to spend some time outside with their friends and families. There are gardens, a pagoda, shrines, bats, a river, exercise classes, a tourist information centre and a cafe. Everything you need to spend a few hours relaxing and enjoying the space. 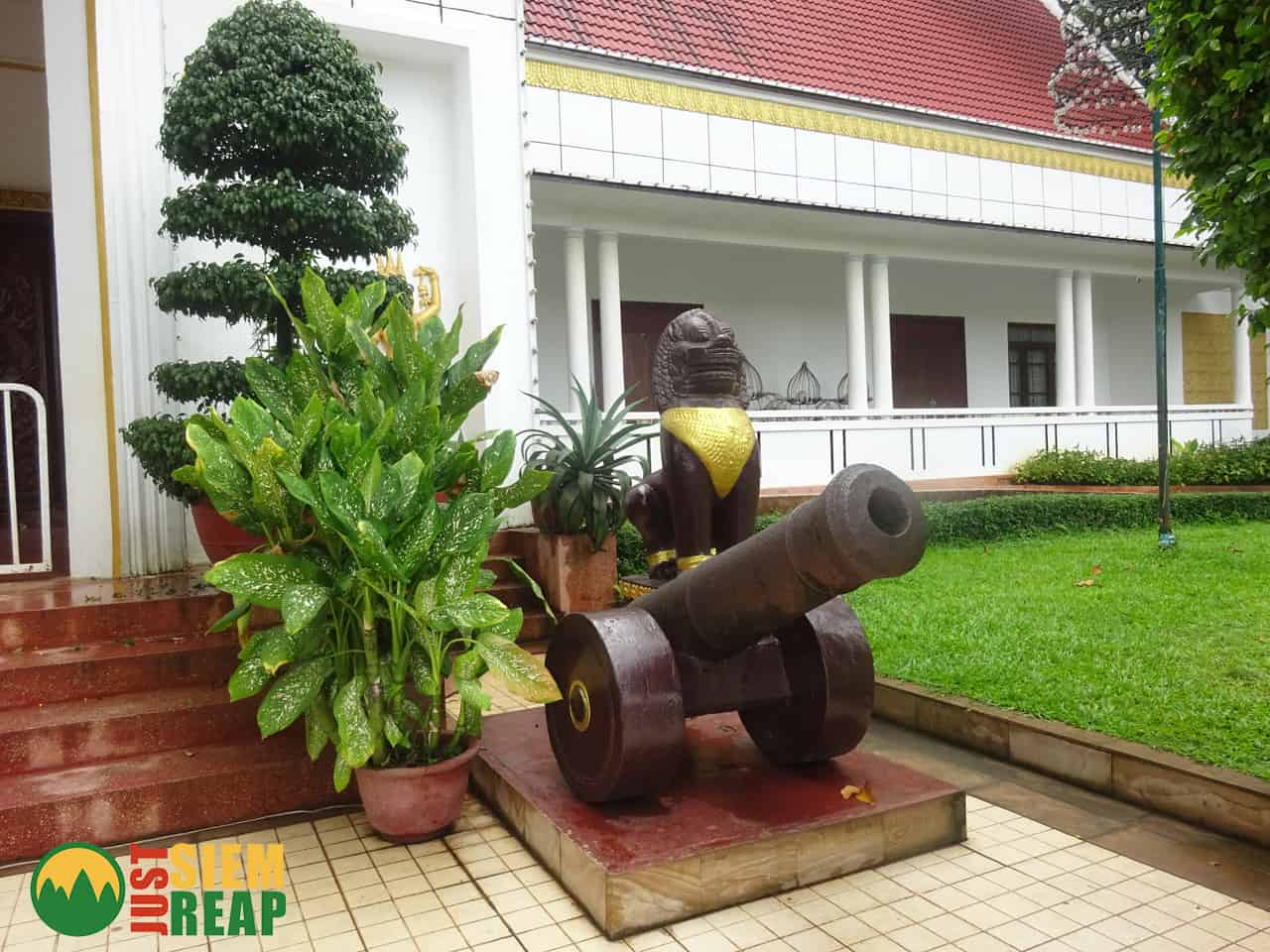 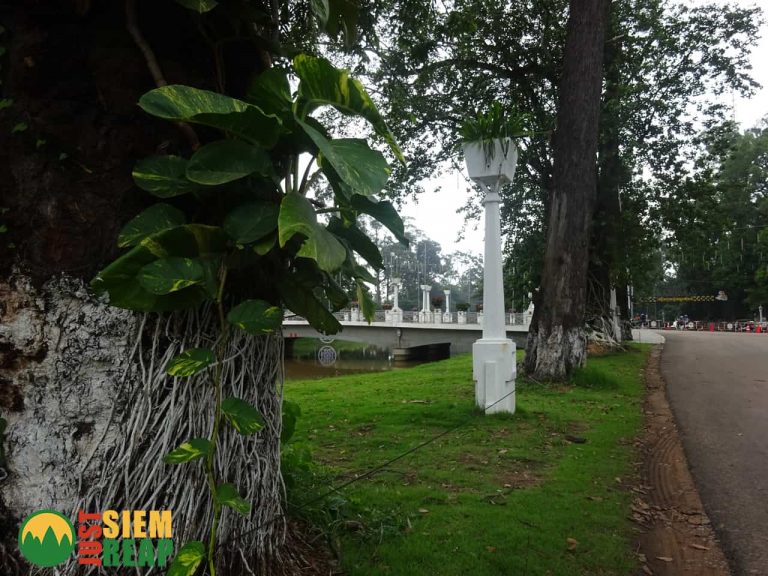 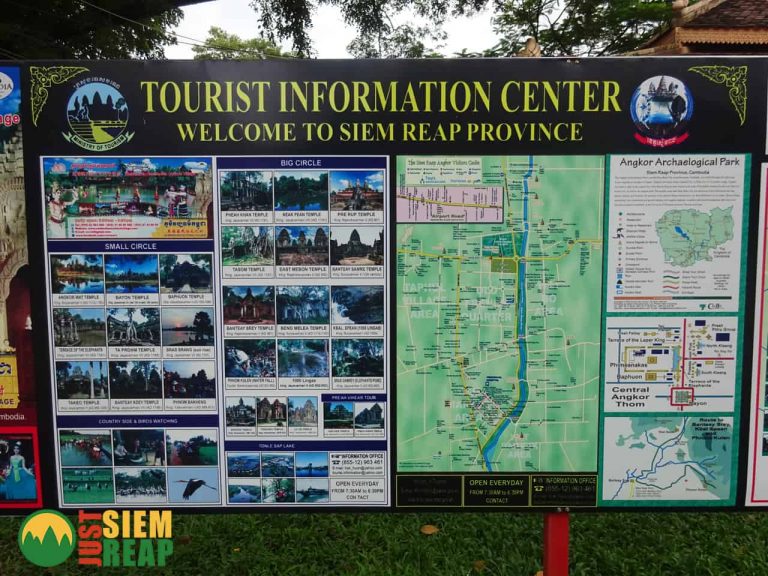 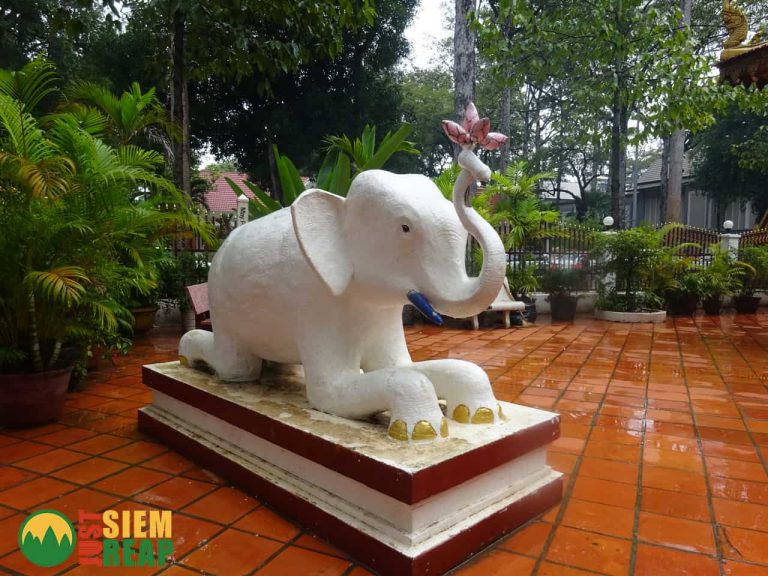 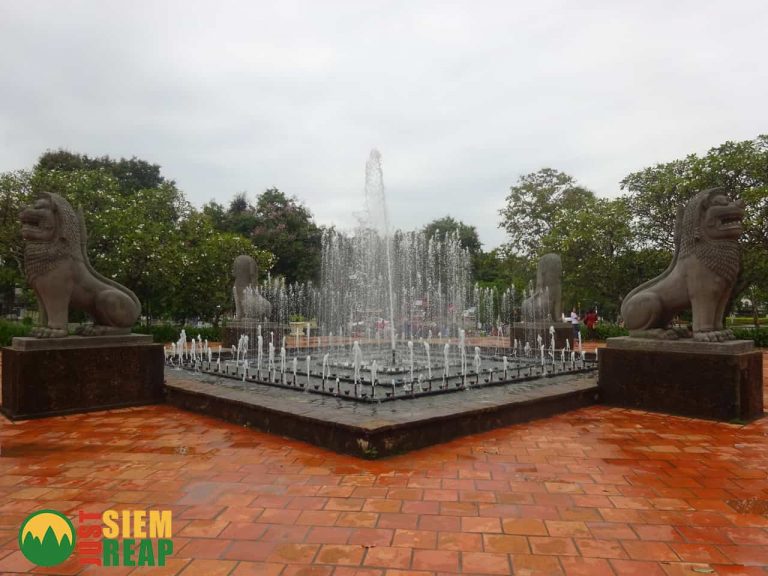 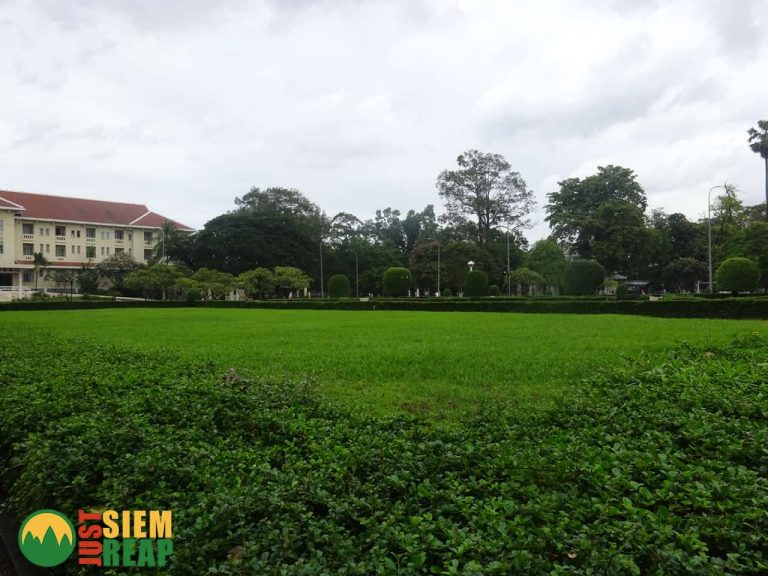 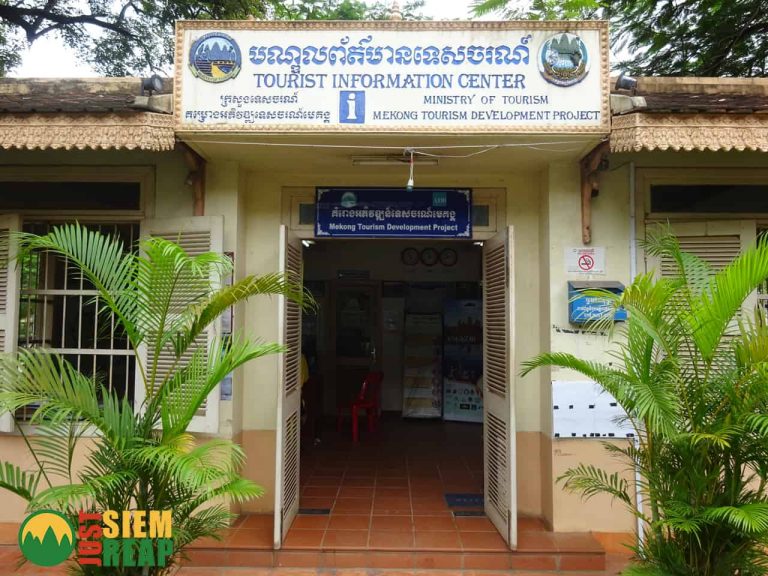 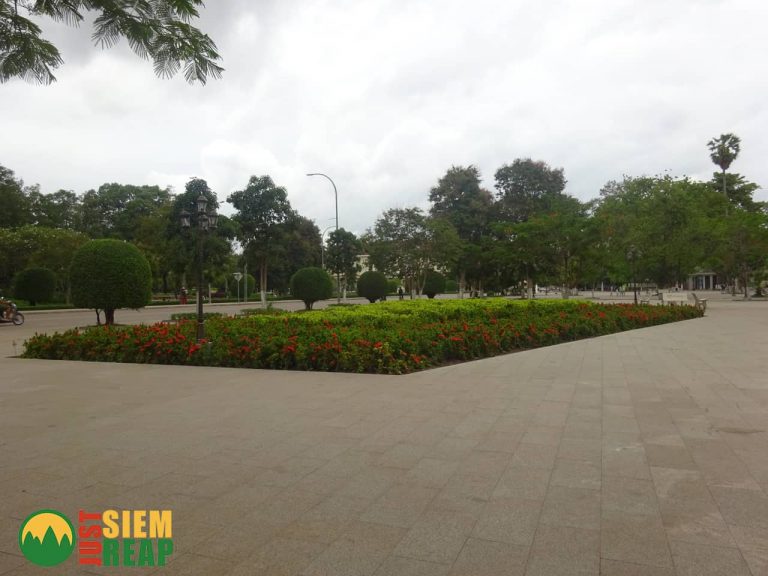 The park consists of many areas. On the east side, there is a small bank along the river. It’s possible to sit and relax on the grass verge here. You might also see some of the locals fishing. It can be a nice place to watch the world go past, especially around 5:30 – 6:00pm when the sun starts to go down.

Next to river, there is a road and a car park area. The area is often full with cars, buses and motos and can be quite busy. As usual, make sure you look in all directions when crossing as you never know which direction the traffic is coming from. People tend to drive on all side of the roads in all directions!

At the south of the car park area where Charles De Gaulle meets Road 6, you find a small police box near the bridge. There aren’t any official opening times, but you’ll usually see police here from early in the morning to late in the evening.

There aren’t many large and paved public spaces in Siem Reap and as a result, this area is packed in the early evenings. You’ll see people doing aerobics, playing games, skating, and generally spending time together. It stays busy until around 7 o’clock in the evening.

The coffee shop is Inthanin Coffee which is a popular Thai franchise. It’s open from 7:00am to 8:00pm. It’s fully air-conditioned and can be a nice break from the heat.

To the south of the park in a small roundabout in the middle of Road 6 is the King Master Statue. It’s a popular shrine for Cambodians to come and pray and you’ll often see many people praying and cleaning the area. On the other side of the street is a pagoda called Preah Ang Chek. This pagoda is popular with locals and tourists and is open until around 8pm. It’s free to enter, but it’s recommended that you make a donation.

Around this area, you’ll find many street sellers. You can buy cold drinks, fruit and snacks. You can also pay to “free a bird”. You’ll see many Cambodians praying and setting a bird free. Most of the sellers here will speak little English, other than knowing the prices of their goods in English.

The Royal Residence is located on the other side of Road 6. It isn’t open to the public, but you can see the front of the building and it can be a nice place to take some photos. It’s the king’s official residence when he is in town. You might hear some people refer to it as the Royal Palace, but it is a residence and not a palace.

In the centre of the park, you’ll find some grassed areas with gravel paths to walk around. There is a pond with a fountain in the middle of this area. On the west side of the park, in front of the Victoria Angkor Hotel, there are more grassed areas. You will also find two ponds here, but they are empty and haven’t had water in them for years. The path around the ponds is mostly good, but has pot holes in areas.

There are two roads which divide the two paths. The line of trees here is home to hundreds of bats. These bats will start to wake up around dusk and will leave the park to go and find food for the evening.

The park is located to the north of the town adjacent to the Siem Reap River. It is on the corner of where Charles De Gaulle and Road 6 meet. To get to the park from the Old Market and Pub Street area, you can walk along Pokambor Avenue which runs alongside the River. This a one-way street, if you’re taking a tuk tuk or bicycle, you’ll can take the River Road on the other side of the River, and then come back over National Road 6 bridge.

Alternatively, you can head north on Sivutha Boulevard and then turn right when you get to the junction with Sokha Hotel and Triangle Mart.

You will find that some of the Siem Reap city tours will stop by the park. Most guests will go without a tour guide and just use the area to relax.

There are hotels all around the Royal Park. Raffles Grand d’Angkor and Victoria Angkor Resort are located to the north and west respectively. On the other side of the river, opposite the park, you’ll find many smaller guest houses and hotels. The FCC Angkor is also just a few minutes walking distance from the park. The Park is in the centre of town and there is accommodation of all sizes in the general area.

The Royal Park can be a pleasant place to visit and relax for a few hours. You can sit on the grass to read a book or let the kids run around. There is a public toilet you can use in the pagoda.

You can also see the bats which come to life around dusk.

It’s also the place to come if you want to stop by the Tourist Information centre.

To the north of the Park is the Raffles Grand d’Angkor Hotel. On the west side, you’ll find the Victoria Angkor Hotel. In the south west corner, there is a row of boutique style shops. Just to the west of this is the Heritage Walk shopping centre. Here, there is a Starbucks, Pizza Company, and many other restaurants and shops.

Next to the Victoria Angkor Hotel is the Angkor Shopping Center. This shopping centre mostly contains souvenir shops and mainly designed for Chinese visitors. In the car park, you’ll often find Chinese tour buses coming and going all day.

The area is also popular during the International New Year, where you can also find live music and entertainment. At midnight, you’ll see fireworks going off in all directions.