Prasat Suor Prat is a 12th century group of 12 towers built by King Jayavarman. The name translates as “The towers of the tight-rope dancers” in English. It’s believed that the towers were used used to support a high wire which was stretched between them.

There isn’t much to see in the four towers and visitors often see then as they drive past. Few stop to investigate up close. 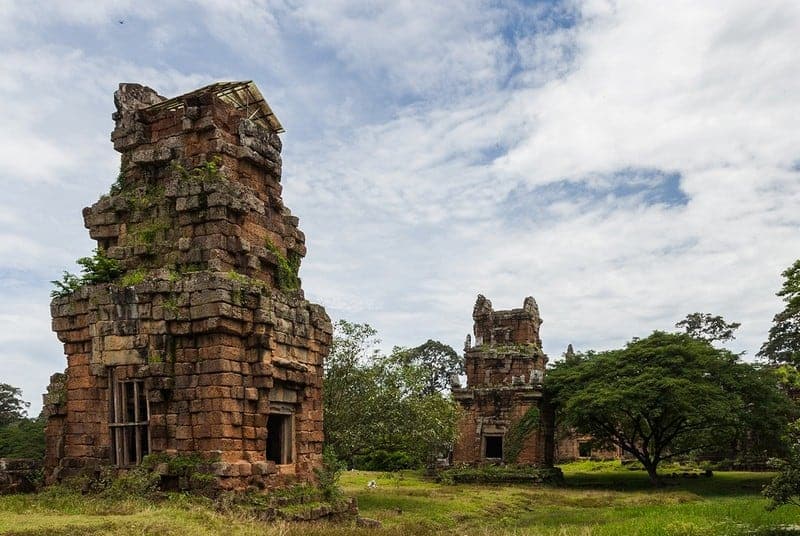 Prasat Suor Prat is located in Angkor Thom in front of the two terraces – Terrace of the Leper King and Terrace of the Elephants. The collection of towers are around 500m from Bayon temple and nearly all visitors to the park will pass by them at some stage during their visit.

Take the road north from Bayon towards the Royal Enclosure in Angkor Thom and you will see the towers on the right side. As the towers are directly opposite one of the most popular places in the Angkor Park, there are plenty of transport options. You’ll see large buses, cars, tuk tuks and bicycles jostling for space in this area.

Most tours of Angkor Wat and the surrounding temples will pass by Prasat Suor Prat at some point. However, it’s unlikely that you’ll get the opportunity to stop and explore unless you explicitly ask your guide or driver.

The most popular tours including the Angkor Wat Small Circuit and Grand Circuit tours will pass by here.

Most visitors will stay in Siem Reap town and then travel to the Angkor Park. There are many hotels in Siem Reap town to suit all tastes and budgets. Booking.com is one of the world’s largest online travel agencies and often has many special offers and deals available for visitors coming to see the temples at Angkor.

This is one of the busiest areas of the Angkor Park and a popular place to stop for a picnic. You can find a nice spot under one of the nearby trees and stop for a bite to eat. You can also sit back and relax while watching the terraces and imagining what the view would have been like for the visiting dignitaries.

Their exact use is a matter of discussion for most historians. Even the date when they were built is not 100% clear. It’s thought that the 12 towers of Prasat Suor Prat were built at some point in the late 12th century or the early 13th century by King Jayavarman VII.

However, some historians suggest that they could have been built by King Indravarman II.

What exactly were they for?

The name translates as “Towers of the Tight-Rope Dancers” and it’s believed that the towers were used as a platform to support a tight-rope. The dancers would then entertain the king and his guests who would sit and watch from the terraces.

Most temples were built to face east or west. However, these towers symmetrically arranged in a north-south fashion. Therefore, it’s unlikely that they were used as places of worship.

Zhou Daguan, the Chinese diplomat, visited the area in the late 13th century. In this writings, he suggested the towers were used to settle legal disputes. If there was a conflict which couldn’t be resolved, both parties were locked in one of the towers. After four days, the men would be let out. At this point, the guilty party would be sick and the innocent would remain healthy.

Another theory is that the towers were used as reception halls for visitors. From here, the visitors would have a great view of the terraces where they would witness parades, games and festivals.

The twelve towers were rediscovered in the 19th century by French explorers. It’s thought that they would have been abandoned at some point in the 16th century like most of the temples in the region.

In 2001 reconstruction work began as a number of the towers were in danger of collapsing. This work was completed in 2005 by the Japanese government and the local Apsara authority.

The twelve towers all sit in a north south line. They are square at the base and have two upper floors. There were terraces built to the west of each tower which would overlook the palace grounds. This is one reason why it’s thought that these “guest houses” were for visitors to watch royal parades and parties.

There are windows on the north, east, and south sides of each temple. On you will see nagas and lions carved into the sandstone.

Nowadays, the road which takes you to the Victory Gate on the east side of Angkor Thom divides the temples.